With this version, AutoArt bring in scale the Paris show-car version of the menacing Bugatti Veyron for the first time showed to the public. We have here a model with major differences confronted by the final road version. In my opinion this color combination is the best from what AutoArt offers as far. When you see the model for the first time is impossible to not remark the perfect combination of silver and grey colors of the body and the beautiful tan shade of the interior which came to complete the general look. 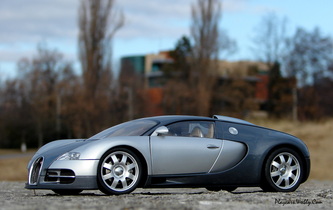 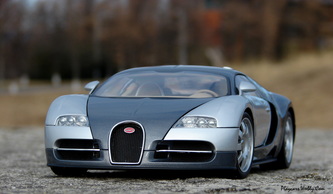 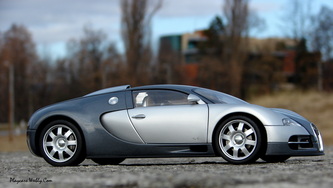 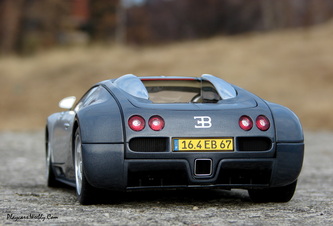 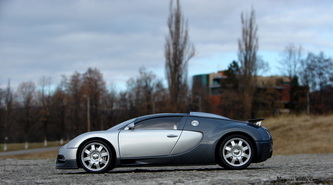 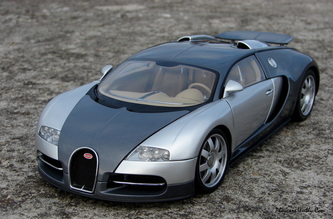 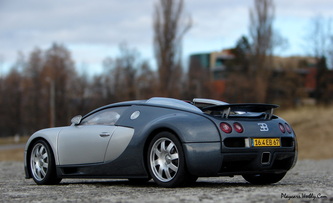 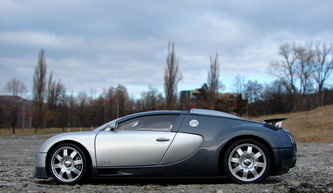 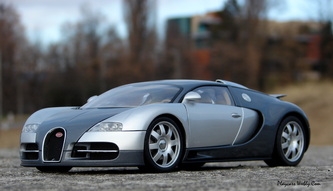 The paint is just perfect, no differences of shade between the painted metal and plastic parts. The paint is deep, shinny and extremely smooth. Stance is spot on and the spaces between different elements of the body are minimal. All the air vents and of course the impressive Bugatti’s trademark, the horseshoe front grill are covered with  mesh. The thin frame of the radiator mask and both elements from the front bumper are chromed and must say are looking fantastic. The chrome is uniform, shinny, very good looking. The both chromed elements of the front bumper were not kept in the design of the final Veyron version. The Bugatti logo is an individual part and was crafted perfectly. The front lights are simply made without attachment stubs. Moving on the lateral side of the model, the perfect chrome can be find on the doors handles, very strong made- you’ll be able to open the door pulling them without any problem. The Veyron’s signature was perfectly created and attached next to the front wheels using a metallic photo etched sticker. It looks very good and delicate. I like the fuel lid as well, because of the color of the body is perfectly integrated into the general design. On the rear side the model’s profile keeps its general perfect line. The two chromed air intakes for the turbos by the both sides of the engine are nicely modeled and of course covered in the same amazing chrome.

The engine is quite simple, only the superior part can be seen because here we don’t have the detachable engine cover, met on the street version. Must admit, that on the street version the engine looks more, more better. The rear lights are beautiful done, even the LED bulbs are replicated. The exhaust is chromed and the Bugatti logo is a photo-etched metallic part. The spoiler is active and the functional system is very simple compared to the street version, without struts or spring mechanism. The rear air splitter is distinctive for this version and looks accurate. On the rear side we have a french license plate, which fits the car. This Paris version has different rims. And in my opinion this is the best looking version. The material replicate the aluminium of the real ones, only the center of the rim is chromed and has the „EB” logo on it. Is a simple and efficient design if you are to ask me. The brake disks behind, are superbly, covered with a metallic coat and the cross-drilled holes are replicated by neatly done dimples which are painted black to look cross-drilled. The calipers are painted and tampo marked with „Brembo”.  On this version the tires aren’t branded. Nothing can be seen underneath, only the air difuser and a small plate which contains the serial number of the model. 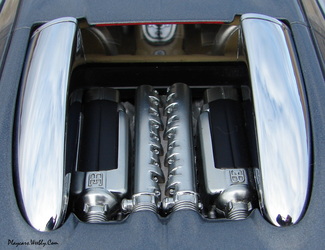 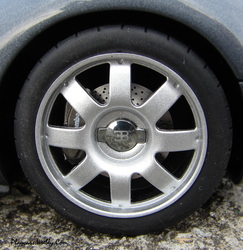 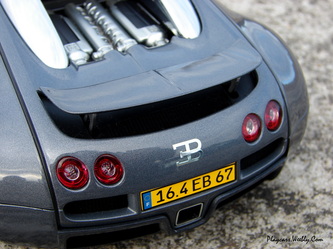 The interior is fantastic and looks just like that one on the real car version. Is cream colored with aluminium finish. The central console replicate the aluminium block from the true car, the buttons are replicated and the main indicators are legible. The aluminium of the central console is covered with a texture which I’m not very sure if is replicating carbon fiber(in this case is wrong) or the aluminium look from the real thing. The Veyron’s signature was correctly replicated in cockpit. The seat belts are textile made and of course the interior is carpeted. 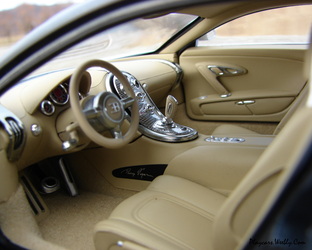 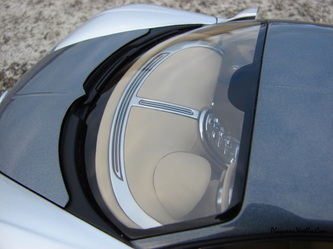 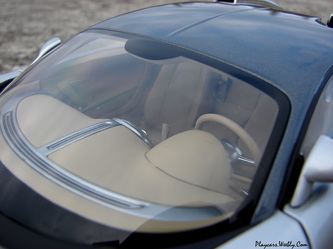 Nowdays a rare model, the Veyron show car from Paris motor show is a good and unique model, you can’t go wrong if you decide to add one into your collection.