Panoz GTR 1 looks more like a Batmobile than a concept for street driving. In fact, the car was developed for gran tourer endurance racing in 1997 and competed in more racing after, including here the 24 hours of LeMans race. Only two road-legal GTR-1s were built to meet homologation requirements set forth by the ruling bodies which the racing cars ran under. AutoArt developed 2 versions of this car, the racing one and the street concept. I will speak here about the concept, because I’m not a race car models enthusiast and this was my option at that time. The model was released in two colors: gold and ocean extreme, that has this cool color change effect from purple to dark violet/dark blue. It's quite something. From the exterior the finishing and paint job are flawless. Must be said,  this is a first generation model from AutoArt and in matter of detailing is different from what we can see today at the newer models.

The paint is metallic, glossy and smooth, applied in a thin layer. It looks much better in comparison with models from the same generation. Not many plastic parts were used on the exterior, conferring a solid aspect to the model. Headlights are very well done, having individual made lenses and the attaching stubs well hidden. The turn signal was correctly made of orange plastic, but that one included in the fender is only painted. All car’s logos are tampo applied and are accurately painted. The intriguer bonnet follows precisely the lines of its real counterpart, letting the air vents uncovered by mesh. Only the huge air vents next to the front wheels are covered with a transparent plastic base, having the mesh texture painted on. On the rear side, the taillights are nice done and excepting the good looking chrome applied on the exhaust pipes, no other detail can be seen. The rear air splitter was good modeled and looks very nice. 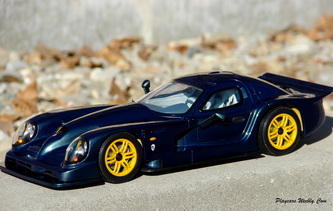 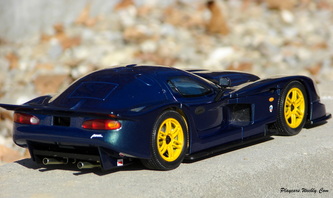 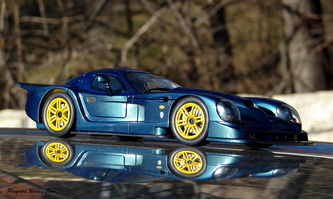 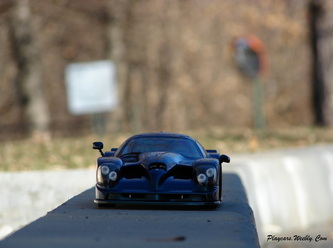 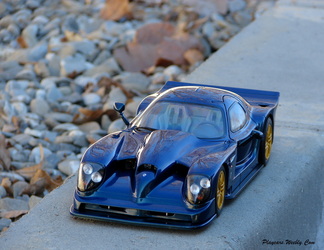 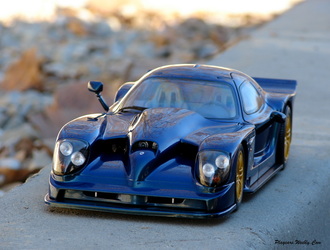 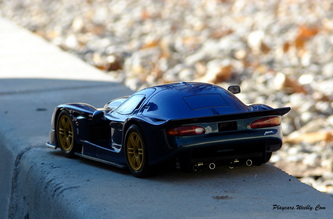 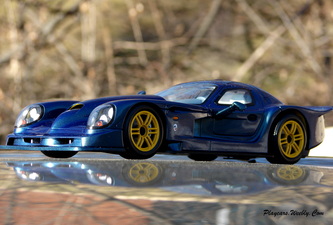 For rims they’ve respected the real line and paint and the lug nut appears like a separate piece. With a proper tool can be removed together with the wheel. Tires have a good profile and the material is a soft rubber. On the brake system the calipers were painted and marked with “Brembo” name and the disk rotors were good detailed with visible rivets. The sills are unpainted and I’m not sure if it was a correct choice, because in all photos which I’ve seen are painted in the body color. Their “natural” color don’t give a good look. 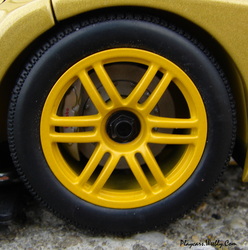 Both doors are functional, but the opening angle isn’t wide enough. Inside we have a simple interior like in the real car and poor detailed. The central console has few buttons and switches modeled and is silver painted. A legible sticker was used for gauges  and nothing more. On the floor a textured plastic, replaced the carpet. 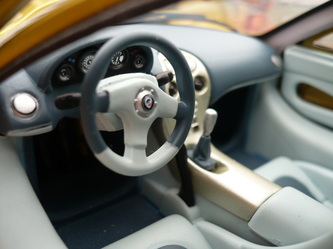 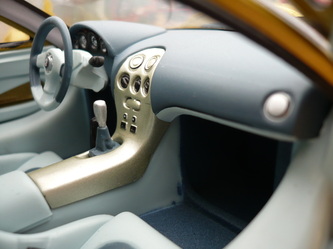 Both huge lids, in fact the entire front and rear parts are removable after unscrewing the screws underneath. The engine is hidden after a plastic cover and only few details can be seen: different lids, few rigid hoses and the cooling pipes. The suspension and brake’s cooling system are also visible. On the rear side are reveled the gear box, the supply system, the frame structure, brake’s cooling pipes and the suspension having the springs moulded in its structure. All the things here are not well finished or great detailed. Underneath isn’t any visible detail, just the specific flat base for the racing cars. 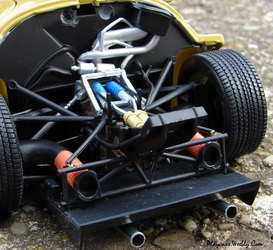 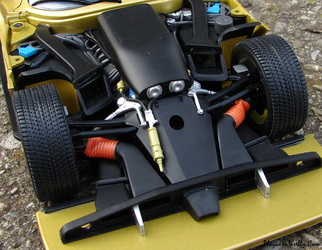 Being an unusual model with a good made and finished exterior, could be a good choice for who prefer this kind of cars. Can still be find easy and for a good price and if you add the Ocean extreme shade you can’t go wrong.