At a first sight Lotus Europa S from AutoArt doesn’t look like an impressive model. The very simple, but competitive real car doesn’t recommend the model to be a very detailed, neither. You need to know some more things about the real car or to be a Lotus enthusiast to add this model in your collection.  And to complete this, just remember the previous Lotus models brilliant replicated by AutoArt. If this model car of the Lotus Europa is a model to have and if AutoArt uses the same skills to create another 1:18 great Lotus, we will see in this article.
This is a little sized model, just because the real car was made in the same way. Is light, even if it has not many body plastic parts, but isn’t fragile. The paint is very well applied, without imperfections or shade differences. Is glossy, isn’t thin applied like on the other models and has a nice discrete pearl effect in the strong light. All the air vents are covered with metallic mesh and must admit it was a surprise for me, being habituated with the plastic made ones presented on the same level models. The lights are nice done, carefully, like in the fog lights case where the LED’s can be seen. No attaching stubs are visible.

The front Lotus logo is a raised piece, painted and is looking wonderful. Moving to the lateral side, the stance appears to be good. The turn lights were attached here with visible stubs. The “S” initial applied next to the front wheel is a tampo decal. We have some beautiful and carefully made details here. The doors bolt is one of this, crafted to appears like an individual part and painted in the same way. Of course the air intake is covered with real metallic mesh. The fuel lid was painted to look like a single piece. On the rear side the taillights are made of a translucent plastic and all the details behind their covers are visible. The spoiler is plastic made and the third, unfortunately only painted, stop light, is included. Between the taillights the “Lotus” lettering is an individual metallic photo etched part. The rest of the inscriptions and the trunk bolt are tampo applied. In the middle of the rear bumper the double final exhaust pipes are chrome covered. The general view of the exterior is excellent. 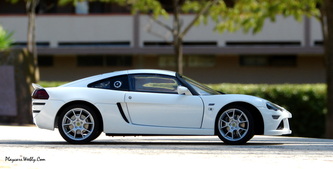 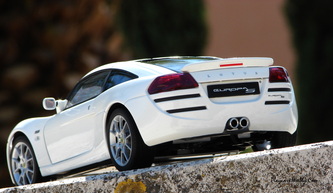 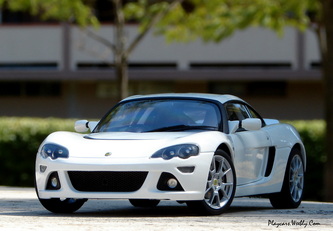 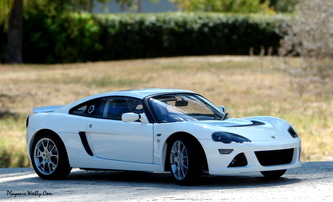 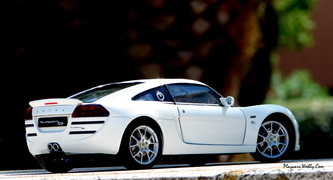 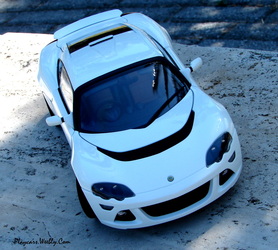 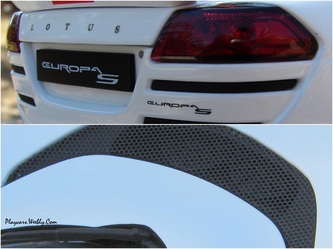 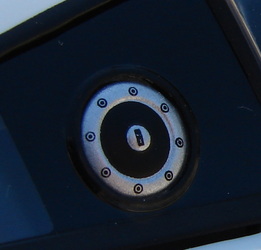 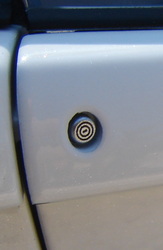 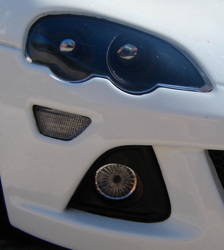 The 19 inches rims are beautiful done with thin spokes, accurate studs and the paint logo was placed in the center. The brake system isn’t bad, neither, having the calipers well moulded and the brake discs finished to look like the used steel, covered with a thin metallic part. Soft rubber was used for the tires, but without any additional mark. 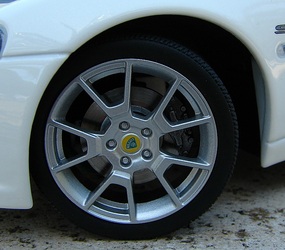 Opening the doors, the interior is revealed, keeping the simple look of the real car. But, it was done carefully and nice detailed. On the dash we have replicated the carbon fiber and looks very good to be honest, some buttons and switches individually marked. The main indicators are replicated by a legible sticker. I like the correct done steering wheel, with the Lotus badge applied in the middle and pedals, being cross drill finished. On the floor, the aluminium is replicated by silver painted and textured plastic and we have the carpet as well. The warning lights button was painted in red, a very nice touch. Painted in a light shade of brown, the seats are well modeled and feature textile made seat belts. AutoArt kept very well all the details from the original car and realized a simple, but well detailed cockpit. 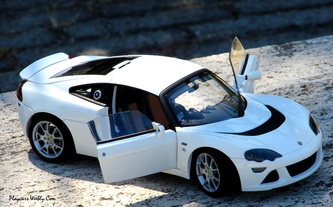 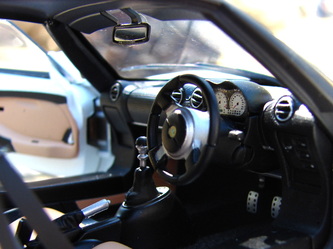 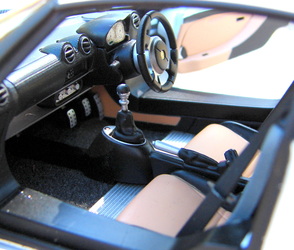 Both lids are functional and are opening on fine hinges. Under the front minuscule lid only 2 containers and a small part of the ventilation system can be seen. The rear bonnet let the engine visible through the transparent window. Being a central engine, the view is minimal, but it’s nice detailed having few separate painted containers, ”Lotus” lettering on and few rigid hoses. The pieces are individually painted and this is a nice detail. Under the rear lid is a little carpeted compartment which is the trunk at the real car. Underneath are visible some details, too. On the front side the individual suspension, having real metallic springs and separate painted parts and on the rear side a big part of the engine, suspension and the entire exhaust system. All the rest is covered with an aerodynamic flat silver plastic base, having the attaching rivets moulded. 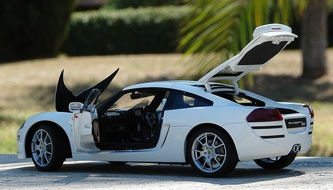 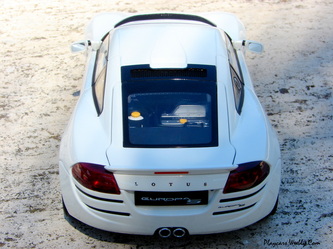 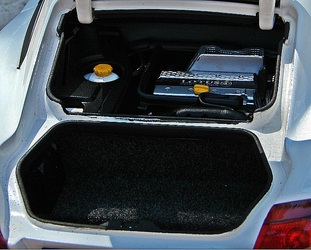 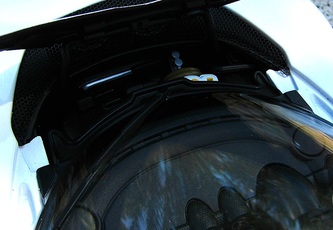 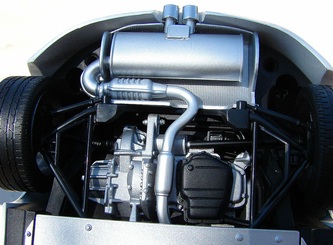 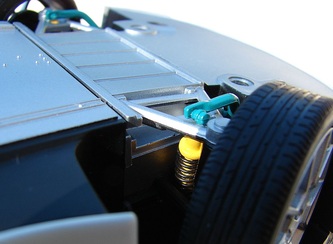 In conclusion, I can only admit that AutoArt did a great job on this model. Is detailed, carefully crafted and painted and the attention for the little details is to be appreciated. For sure they’ve kept well the quality line of the previous Lotus models. For me the model was a really good choice.