During the sixties, both Maserati and Ferrari were known for their V12 engined gran tourers, luxurious, fast, but very expensive. Nothing seemed to contest their supremacy, until a little Italian producer dared to crave a piece of high-performance cake. Iso Autoveicoli S.p.A. was better known by producing the bubble Isetta, under the BMW license in the 50's. The owner Renzo Rivolta decides in 1962 to move into the luxurious high performance segment with their first car, the Rivolta model. Produced as a limited series between 1963 and 1974, Grifo came as its successor. Borned from the hands of Giorgetto Giugiaro at Bertone and set in motion by the mechanical work of Giotto Bizzarrini, Iso Grifo was the perfect marriage between the italian design and american engineering. In 1968 the model received its famous „ Pagoda” scoop on the front hood, designed to hide the massive 7 Litre engine, a Chevrolet L71 big-block, a Tri-power version of the 427 engine. This was the pass to the Grifo series II, who will receive in 1972 a face-lift, having now a sleeker look and hide away headlights. BOS chose to replicate in their 1:18 resin made collection a model from the second series. Is the first replica of the car in this scale and now is the right time to see how they managed it, having such a fascinating subject.

Released from its box, the model surprise by the low weight. Is the lightest model in scale 1:18 I've ever had. Seems to be well put together and finished, excepting some glue residues around the hide antenna. The paint is metallic and well applied, being in the same time very shiny. Thinking about the time when the car was released this shade must have been very exotic and unconventional. On the entire body the shut lines were well molded and appear to be thin and realistic. On the front side the lights are exemplary made, having even the light bulb visible and the thin chromed frame around replicated. Only the signals were painted, in a metallic shade of orange that not convinced me very much. In fact, the signals integrated on the front bumper have clear glass on the real car. The rear lights are well made, as well, just that the background was made by a shiny material and in a strong light gives a strange reflection. Initially, I thought there was a metallic paint, as well. The reflective parts are individual plastic parts and were applied after. On my model, the left rear light wasn't fixed properly and the result comes in an unaesthetic gap. As on the real thing, the model provides a lot of grills and air vents, individualized with a blackwash and having small dimension, the result is acceptable. But, personally I don't like the massive textured plastic pieces on the sides, trying to replicate the air vents. Comparing both, the real car and the scaled replica from one side, there is a questionable element: the sills, that are chromed on the real thing, but painted in the same body color on our model. 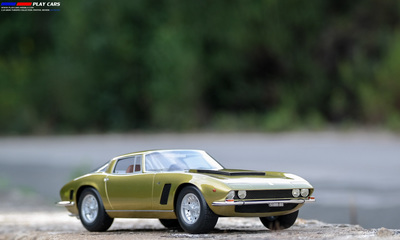 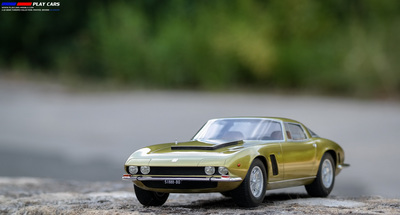 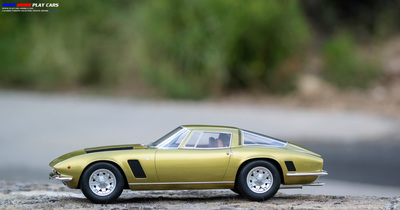 Now, I'll like to mention the strong parts of the exterior. Let's start with the decals, replicated by photo-etched metallic parts, very nice looking, especially the front one, embodying the manufacturer's logo and carefully detailed. The chromed parts come in to the second, BOS always excelling in this chapter. I like the thin and metallic photo-etched wipers and must admit, I was surprised to find them done this way on this model. Not the least, a nice touch is the real number plates, helping the model to achieve a realistic look. The characteristic „penthouse” of the 7 litre engines on the hood was well replicated and the air vents around are made by a textured base. The windows were better fixed on this model, but still I'm not a fan of the silver paint frame, especially on this model, were a right chrome replica would be revealed better the body line's elegance. must be mentioned that the driver's mirror wasn't replicated on the model.
The real car rims have a very intriguing design and on its replica, the manufacturer managed to reproduce them in a decent way. Is missing only the air valve. On the lug nut the griffin has found his very special place. From my photos the tires may occur higher, but I assure you that in real are matching the size very well. Even from the photos of the real car is easy to observe the traditional sport tires of that period having higher walls than usual, the Pirelli Cinturato 205VR15, in our case. On this model are not branded, but keep a right profile. 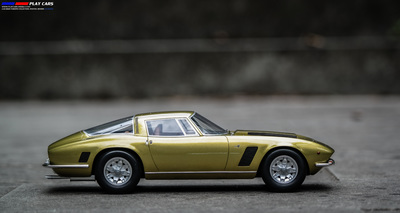 Moving to the cockpit, I can observe that the color is in perfect contrast with the exterior's paint. If is to put in evidence the good parts here, then I'll speak about the seats: are well finished and textured having replicated even the stitches. The dash, even if visible and right made, replicating the wood trim, was put in place by a single sticker that includes the trim and indicators as well. Very cheap and uninspired way to replicate such a great interior. Another minus is  the chrome effect, replaced by silver paint on diverse switches, ornaments or on the steering's spokes. I dare to say that here the interior's greatness was ruined by this cheap interventions. But, to end in a positive manner, I was happy to find the griffin again, this time in the steering wheel's center.

As we used when it comes about BOS models, underneath the details are complete missing. The brake or suspension details were totally ignored. The flat plastic base wears only the model's serial and on the rear side, the exhaust, featuring drilled pipes. 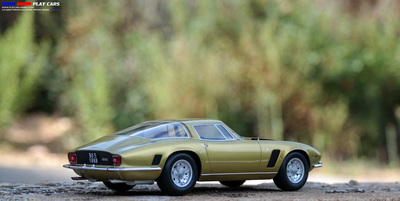 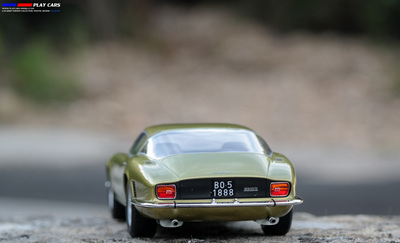 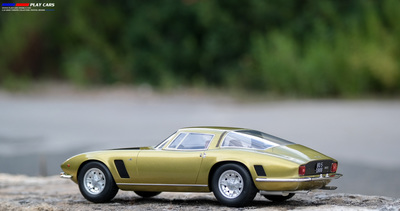 Since I was waiting for a very long time for this model to be replicated in 1:18, my expectations were higher as well. The model is great to be seen on a cabinet's shelf, but lacks a lot of good details, as I mentioned. I'll say that only the side air vents made by real mesh would be greatly improved the general look. The model lacks that feeling of „quality” just because some details were replicated by cheaper parts or replaced by cheaper solutions. I'm not speaking about the crafting, I already said the model feels great and solid. I would like to see, as well, more shades variation for this model, since many collectors are looking for classic colors. Between more variations, I'll choose other one for myself, too. Maybe in the next future BOS will rethink their position and will surprise the collectors with better upgrades for a more realistic looking and qualitative models.