During the 2004 model year, Chevrolet released a " 24 hours of Le Mans Commemorative edition"  optional package, available for all three C5 versions. This special edition celebrates the C5-R victory, the first and second places in class finishes at Le Mans. This model distinguishes most from the regular model by the particular " Le Mans blue" shade and the generous silver and red stripes applied on the center of the body. This particularity was an option only for the Z06 model. Other particular elements on the interior and exterior were available for this edition: 2 tone leather seats, particular headrest embroidery, exterior labels, polished rims with a distinctive lug nut and a carbon made hood, only for the Z06.
The C5 Z06 "Commemorative edition" was brought in 1:18 scale by AutoArt and at the date of this review, it has some years back. Personally I didn't knew about this model, finding it for chance and buying instantly. The general look of the model is great, it seems to follow the right proportions and lines as the real model. The spaces between doors and the rest of the body seem to be quite large, but looking the model in reality isn’t so disturbing. The stance is great. The special blue paint chose for this commemorative edition is well applied, not so thin like on the newer models, but shinny and uniform. All the Corvette logos are tampo decals very well applied and the characteristic stripes for this edition are painted. Only the turn signals are visible on the front side, the pop-up lights aren’t functional, unfortunately. On the both sides the turn lights indicators are using a little attaching stub. Looking on the rear side the taillights are correctly done and the final part of the exhaust is chromed. The “Corvette” inscription is modeled on the body. No license plate for this model was added, only the base with “Chevrolet” logo on it . 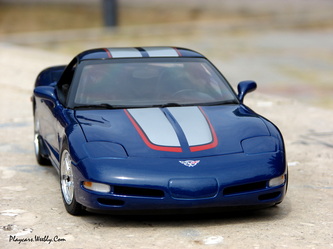 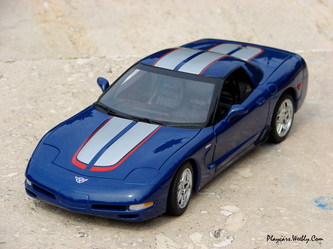 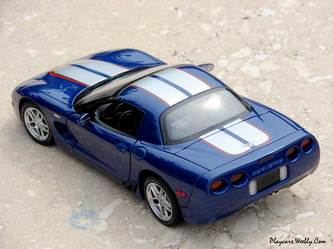 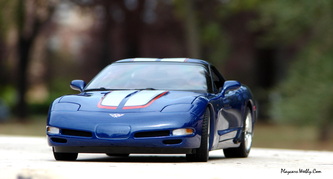 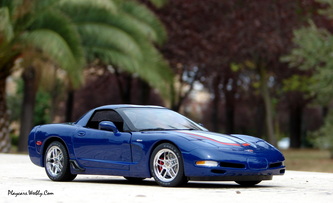 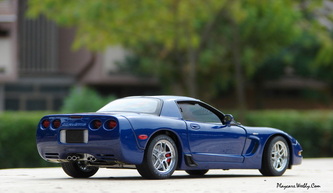 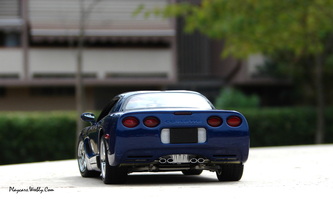 The rims are correctly done and looking great to be honest, having the “Corvette” logo and specific inscriptions for this edition in the center. Were covered with chrome of high quality . The studs are awesome, looking like the real thing. The brake disks are covered in the AutoArt style with a metallic part to replicate the real steel. The calipers painted correctly in red featuring the "Corvette" lettering on their surface. A rarity for the AutoArt models, the tires are branded. Are made of soft rubber and provide a realistic note of this ensemble. 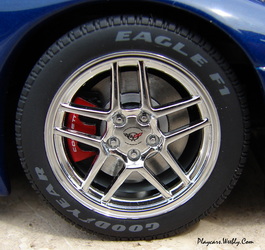 Inside, the cockpit looks very good and carefully finished. We have rich carpet, the seat belts are made of textile material and on the central console all the buttons were modeled and marked after, using the proper color. The “Corvette” logo was applied accurate to the real thing on the resthead of the seats and modeled in the steering wheel center. For the Z06 the seats were covered in black and perforated leather, which was carefully replicated on the model.  A very nice touch I must admit. The indicators are represented by a legible sticker. Only the pedals are poor looking and some more attention could be put in the gear-shift crafting, the final result being very thick. For the seat belts they've used a soft textured rubber. 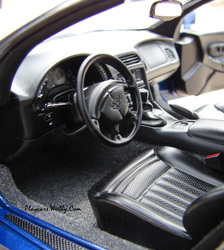 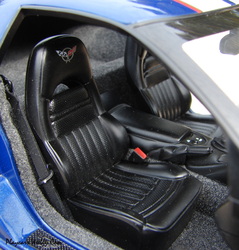 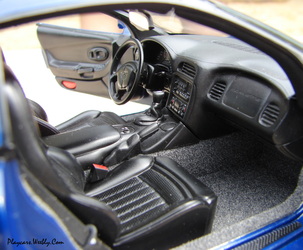 The rear bonnet can be open and the trunk is carpeted. The functional parts on the real car were not marked here like in the “50th Anniversary” edition. On the front lid no sign let us know that on the real car was made of carbon fiber. Opening it,  the big block engine is revealed, having a nice look. It looks much better in comparison with other models from the same generation ( BMW M3 for example). The engine block is painted in red, few hoses and some individually made pieces are present. Are included lids for the different containers and are marked together with the warning labels. Those little things offer a very realistic note to the engine bay. The hinges are acceptable. 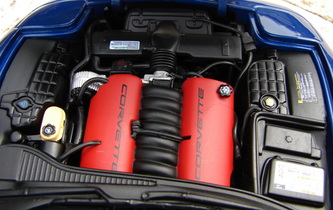 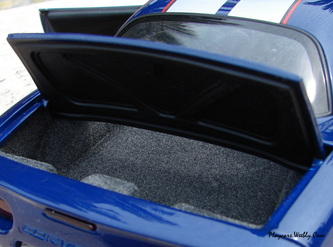 In conclusion, I consider that for the time when it was released, the model was great and it still is. Especially the interior. I don’t see major differences in comparison with many newer models in the same range and I can’t ask for more.