Since I’m a McLaren F1 enthusiast I don’t know what  made me add this model in my collection, the model itself or the exotic Papaya orange shade. For me this is the proper color for a F1. I have here the 1:18 UT model of McLaren F1 XP LM. Are three version of this model, excluding the race ones, in the same color but with visible differences on the body, spoiler, exhaust type, interior and maybe more but, I will not speak about this particularity now. I will make reference at the model that can be seen in the photos here and which I have in my collection. Is a rare model, first because its age and because only UT made it. But, still can be find and if you are lucky enough, for a good price.

The model has more than 10 years age and for that time for sure it was a great model, being highly recommended by the real car. For sure it was the UT best seller. From the exterior isn’t a bad model if we look at it today, but regarding the details, it lacks a lot. The fantastic shade of orange is good applied on model in a thick layer comparative to the newer models, but glossy and without differences between the painted metallic and plastic parts. No visible stubs were used to attach the lights, but their look isn’t real. The plastic is matte, giving the impression that a colored piece of paper was attached under the plastic cover. The light's lenses must be curved not plain like in this case. The car’s logo is a decal, in good condition for its age and the air vents near the front lid are only marked with black matte paint. From the lateral side the stance and dimensions look spot on. Only a disturbing fact here, if we are to look to the body line between the wheels, we will see that the door edge is a little bit out. Is visible only when are you looking the model closer. The air vents are not covered with mesh and the turn lights are only painted and almost invisible because of the paint color similarity with the body shade.

The door bolts were put in evidence with silver paint, the fuel lid is painted in black and for the little rear windows, they replicated correct the texture in the superior part. On the rear side the taillights are better good looking, being made of a translucent plastic. Unfortunately the grill wasn’t covered with mesh but with a transparent plastic base having printed on, the mesh texture. The base is thick and doesn’t give the expected result. On it, are applied the stickers with the car logo and XM initials. The spoiler is made of plastic without any other texture or detail. The superior grill, next to the rear lid is covered by a plastic mesh, too. 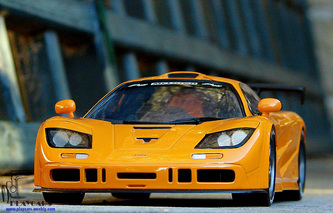 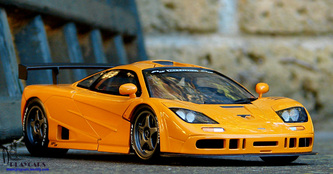 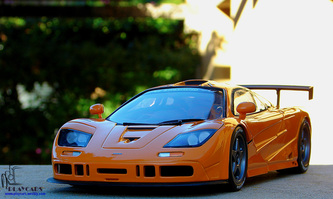 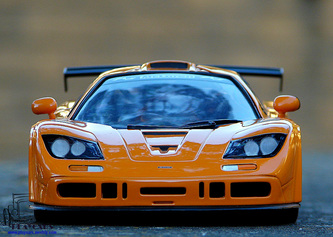 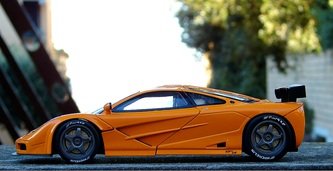 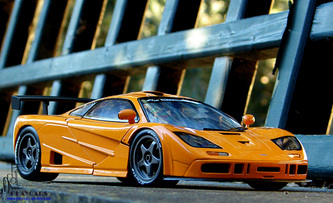 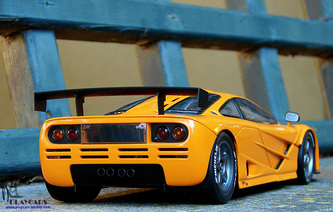 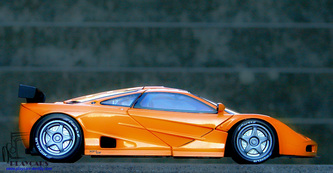 The OZ Racing wheels are beautiful and precisely made, branded and painted. Not the same for the brake system almost non existent. Only the huge and unreal brake disks are visible being dimpled to fake crossed drilling, but replicated without calipers. Too bad, because it wasn’t a hard detail to be replicated but, an essential one. A hard plastic was used to model the slick tires and were branded with the type and producer name. 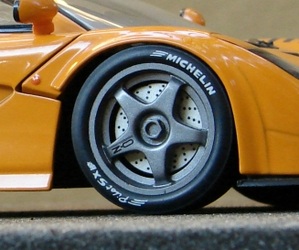 The doors are made of plastic and opening on fine hinges. Between the door's windows and the little rear one, the gap is big and visible, comparative with the other body shut lines. The interior is decent for its age, even good I can say. I like the racing seat’s fine shape but I don’t like that they’ve chose to mould in the seat belts. Not even the intention, to replicate in some way the carbon pattern. We have a lot of buttons on command console, some of them individually painted and a sticker to replicate the main indicators. I really like the pedal detailing, even their grip parts were great replicated. In the interior is visible the roll-cage. 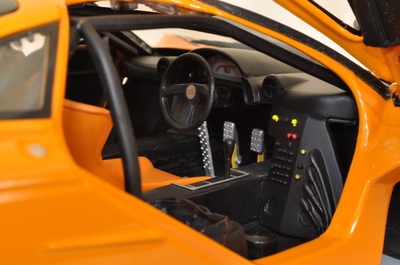 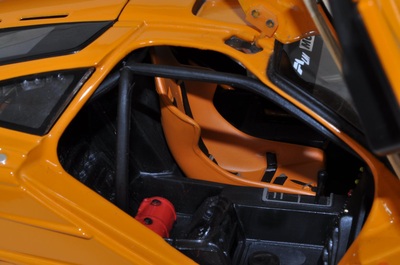 The engine is simply looking and poor detailed. No carbon pattern, not a great finish for the individual pieces and all the hoses are only moulded, together with the surrounding panels. 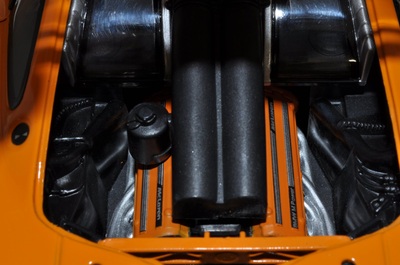 The model reveals its age from any angle, but for me is the image of a fabulous car. No better versions for the moment are available, only a few still to come. For the right price is a model to have and a great presence in the supercars models line