p       l        a        y        c        a        r        s
In the collector's world, the GMP name is synonymous with american muscle cars, replicated to high standards and insanely detailed. The manufacturer gave us the best replicas of some bad ass cars from the real life, in limited editions that inevitably captured your attention and the last money from your pocket. They surprised everyone few years ago, releasing a short series of two Ferrari models replicas, including here all the circuit and prototype variations. I had the opportunity last year to find one of those models for a very good price and I bought it instantly, being attracted not by the model itself, but the possible details put on it. It was about the 312P model, in the prototype version, limited at 312 pieces and now I'll try to take a complete look on it, to see if GMP kept their usual standards in this new challenge.

The model comes in two large boxes, in fact a card cover and a styrofoam shell. The black shiny cover is printed with the photos of the model, info and license terms. Inside the box, the front cowl and rear body are wrapped and separated from the chassis. Is nice to see that someone there wanted that the models arrive safety to the destination, because the individual parts are wrapped and sponge parts were distributed to capture the shocks during the transport. The chassis wasn't fixed by any screw, so can be removed quickly to enjoy your sight. You can realize from the first moment, that you won't be disappointed, the plenitude of wires, plumps, little pieces, in a single word the magic word for us collectors "details", come already to your attention. The chassis itself isn't heavy, is solid and how GMP knows its job, incredibly detailed.

I don't know where to start because everything is visible and catch my sight. The chassis is made of solid silver plastic having the original single panels of its structure highlighted and surrounded by moulded rivet heads. Let's start from the front side where the cover panel, including the dashboard components can be removed. Now the pedals, the functional direction and something nice detailed and covered by few info, regarding I think the electronic system are visible. More complicated is the suspension and the brake system behind the wheels, including metallic springs, flexible wires and brake discs covered by a metallic photo etched part for more realism. The suspension is functional, having all its parts fixed with little screws and featuring metallic springs. All the system is very sensitive and is a pleasure to see it in function. Two air intakes recreate the cooling system for the front brakes together with two rubber made tubes. 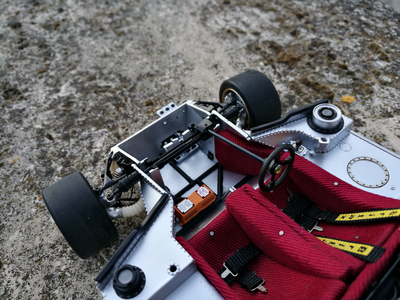 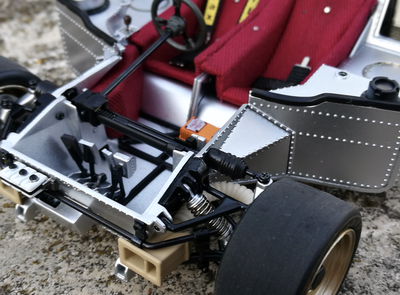 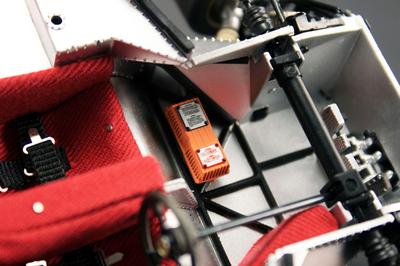 Let's move backside where is the true show. To detail his product, the manufacturer gave an intense attention to every original part and reproduced it carefully here. Must mention that everything is finished well, how only the top brands care their products. The entire ensemble is wired and plumbed, are different sizes of flexible tubes and pipes down there, surrounding the lids and other little pieces like a web.
Metallic photo etched parts were used to represent the grills or to cover the radiators and look fantastic. But, what is really a nice touch is the battery stand: developed as a single piece, the battery sits on a metallic perforated frame. Suspension is visible, functional, revealing the same metallic springs and I like a lot how are fixed on the chassis with a metallic clamp. And if you are asking me for another prove of this detailing madness, just look the calipers where a millimetric wire connects the two pads or the real springs that keep in place the exhaust pipes and the oil radiator. If isn't enough the little engine cover can be removed and other components come to the light: the vent, plugs and my favorites, a lot of transparent tubes. The brake cooling system is in place and on the tail were fixed the real looking lights. On both sides the safety clamps were highly reproduced and detailed with two functional metallic parts. 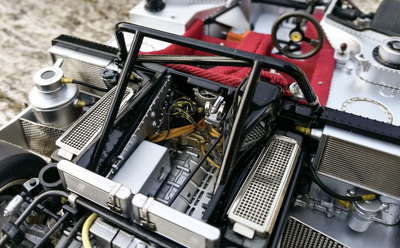 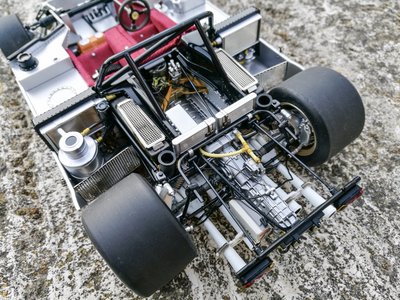 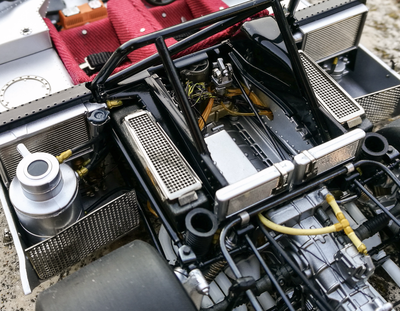 Into the cockpit, both seats are covered in fabric, featuring metallic pins and real seat belts with metallic photo etched buckles. The dashboard is as simple as a racing car could have it, is entirely wired keeping an original scheme and the best of the show, the start key is ready in the ignition. Even if is a small piece, the shift gear was detailed with a proper photo etched part.​

The rims are simple, right colored and can be removed using the specific tool from the box. One of them is slightly damaged on my model, a paint problem, but nothing serious. Tires are branded and made of soft rubber, feeling very close to the real thing. 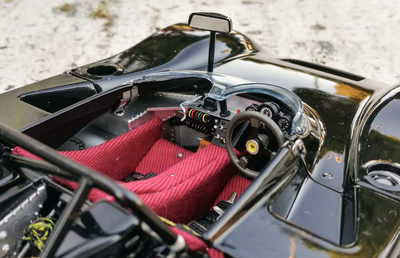 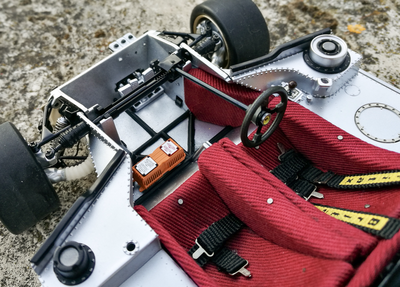 The front suspension and everything around there is easier to be observed from the underneath, but the true pleasure is the engine finished in two tones plastic, that reveals more parts and details. Everything is great finished and put in evidence, well put together, wired and is a pleasure to see the curves along the unique designed exhaust pipes. A short inscription reminds us that the model was made under the official Ferrari license and the manufacturer badge is moulded on a metallic plate. And to understand how was possible to reach this high level of detailing, the inscription "hand crafted" was stamped on the chassis.

The huge bonnets can be fixed easily and come to put the model together. Are metallic, well painted and the front one is more detailed, because keeps the lights, wired on the interior, the Cavallino rampante logos, all of them nice made and perfectly visible and the two doors, functional with beautiful thin metallic hinges. 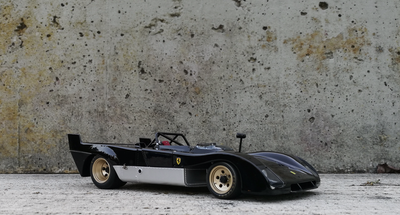 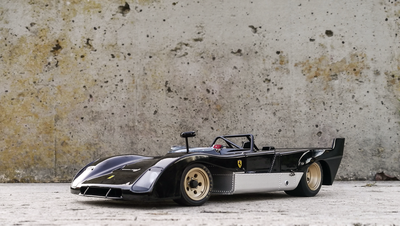 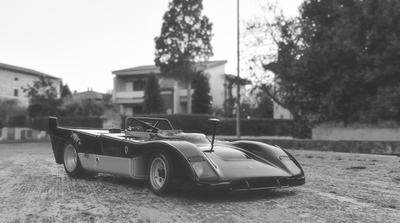 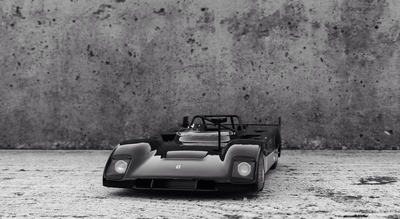 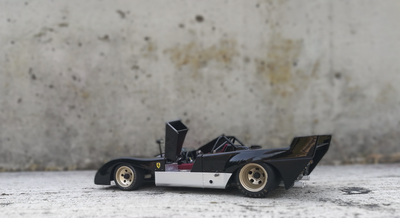 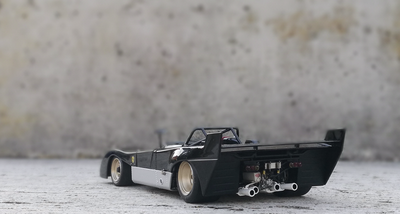 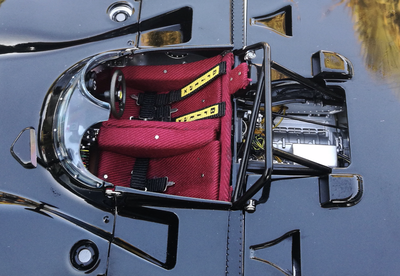 Underneath, the model keeps a flat construction including the same moulded rivet heads, only on the rear side, the engine compartment is open and feature the beautiful block finished in two colors. Is a pleasure to follow the curves from the intriguing design of the exhaust pipes, excelent reproduced here. For every wheel the suspension and the brake cooling pipes are visible, too. A little metallic plate was engraved with the GMP initials and to reveal how it was possible to reach this level of detailing the "hand crafted" inscription was printed on the base. 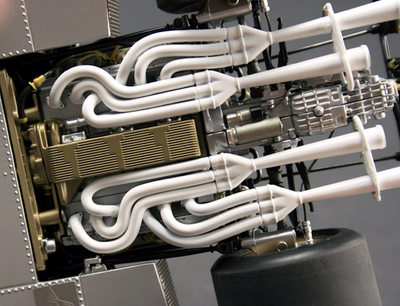 If you are still looking for a verdict on this model, if you're still in doubt and want to hear an opinion then, this is mine: yes, they did it! Something different, not a muscle car, not a drag machine, not a street fighter, but a classic european race car, replicated better maybe than most of their usual products. Great work, great details, a true replica of the real thing. And just think, they did it on the first try.