Hispano Suiza is an unknown name in the models world with few exception in the 1:43 and 1:24 scale. Being an historical important manufacturer all the real models are classics. The HS 21 GTS represents a company project, a trial to bring alive the old  name and was thought for the race track. From all concepts presented in the last years by the historical brand, some information about the real HS 21 GTS are very hard to find. Very surprising that this model was chose to be replicate in a big scale, 1:18 in our case by an almost unknown name in the hobby, too. Guiloy is a spanish brand,making first 1:43 models, passing away to 1:18 scale with some very interesting concepts, they will produce only motorcycle models until the end of activity. I made a mention about their releases in 1:18, where, very interesting they’ve chose to replicate in a major part some fabulous car concepts in the automotive history: Mercedes C111 and C112, McLaren GTR Le Mans Prototype, Chrysler Atlantic. All were poor models but with a great viewing effect.

The Hispano Suiza HS 21 GTS is from far the best model they ever released. It comes in a folding display box, nicely accessorized with functional buckles, even a key to lock the box was available. The model looks good, covered in a good applied paint, maybe a little thick for my taste and not very glossy. The stance seems to be good for a race track car, except the front wheel arch who looks high and its final parts too close to the wheel.The shape might be the correct one from what I can see in the few photos of the real car. A beautiful detail is represented by the metallic chromed meshes, perforated which cover every air vent. The front lights are looking good and the taillights are even better done, being separate pieces made of colored semi-transparent plastic. The reverse light was correct replicated. The model’s body is metallic, only the chassis, spoiler and the rear air splitter are made of plastic. The exhaust is paint in silver, maybe the cheapest and faster way to replicate the chrome and the tow ring is present and red painted. All the logos are tampo applied. The large crane on the both sides of the model is a remember of the legendary symbol of the real manufacturer, a great piece of art on the real cars. 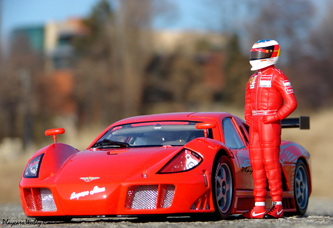 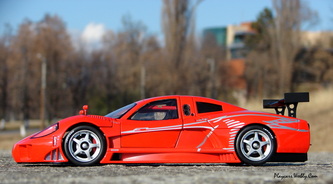 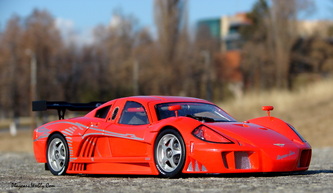 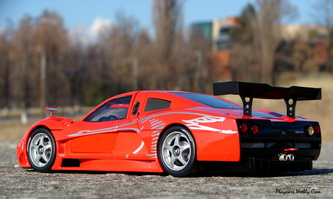 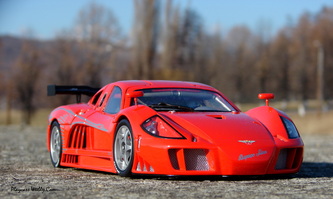 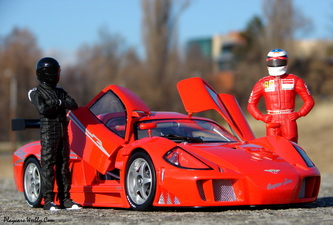 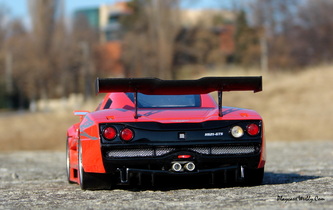 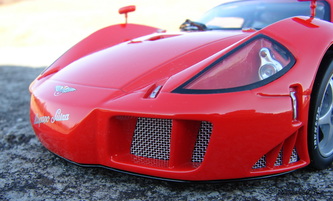 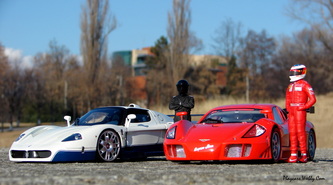 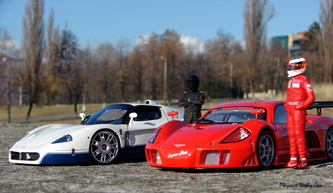 The rims are not  great detailed, looking plasticky and poor . Maybe, is just the manufacturer lack of experience, like in the brakes case, too. The rotors are painted in silver and the disk was kept black, maybe for replicate the carbon counterparts from the real car. The calipers are static parts, poor made and painted in red. The tires are marked but again are disappointing. Are made of shiny plastic with a slick profile, but a huge plastic residue could be seen around their surface. It looks more like a toy than a model reproduction. 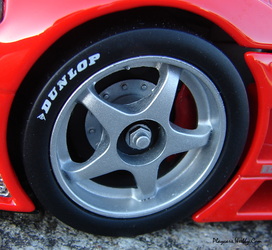 The doors can be open on fine hinges, but the opening angle isn’t as large as it should be and surprise!! The cockpit is a huge difference comparative with the wheels view. I was very surprised to be honest. Being a racing project the cockpit is surrounded by a roll cage very nicely replicated. The central console has the buttons and switches moulded and painted in individual colors. The passenger seat is missing and the racing devices are all around, beautiful crafted and marked. Even a fire extinguisher is put inside as an individual piece. The indicators are replicated using a sticker and the racing steering wheel is properly moulded and colored, having the gear paddles behind it. The racing seat looks a little bit boorish, but I don’t know how it was in reality. Unfortunately the seat belts are made of plastic and the pedals are black plastic. Even if the craftsmanship doesn’t reach a superior level, the rich level of details is giving a great look to the interior 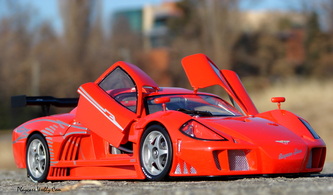 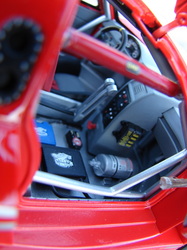 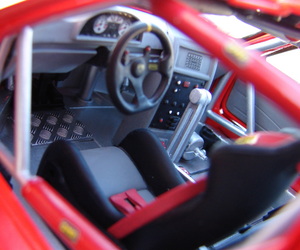 The lid behind can be removed unscrewing the 2 screws underneath. The engine doesn’t look bad either, comparative with the others Guiloy’s models. The engine is a raise part and is surrounded by other individual parts and the chassis frame. It looks plasticky and cheap, but the wires and suspension’s springs painted in shinny colors are giving a modest realistic note. The chassis made of carbon on the real car is replicated here with thin waves moulded in the plastic. On the front side, the lid can be removed as well, but needs some more effort. Go easy to not broke something and be very careful at the fragile mirrors. Under the lid some details are replicated, even if is made of the same cheap looking plastic. On the chassis are visible some marks and the painted rivets. The suspension has visible springs, but unrealistic done. The wheels are supposed to steer,but the radius angle is almost missing. 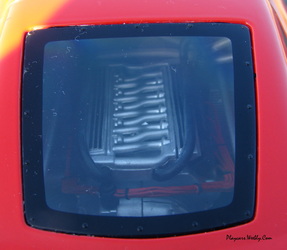 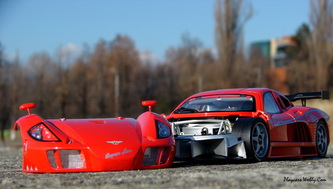 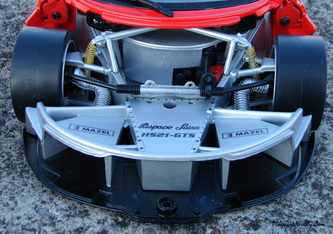 The model represents a visible effort from Guiloy in comparison with the other models. They had no experience to do this job better and maybe want to keep a low production price. Even if the look around the wheels ruins the general view, when is exposed the model doesn’t reveal all those drawbacks. Keep the lids on and display your model, because for sure will be an eye catcher. Is an unusual model of an unknown car. Is a matter of taste, but I would avoid the black color on this model.