The first scale replica of the MC12 seems to be a success, since is very hard to find on the models market. The street version was released by Mattel in two levels: basic and Elite. The differences are huge between them and how is already known the Elite version, which I will review here, is the best. It wasn’t easy to find one, but in the end I was lucky. It comes in the same Elite display box like the Ferrari models, nothing special here. Because of the generous dimensions of the real car, the model is huge. Isn’t a heavy model, having enough plastic parts. As I said , the dimensions seem to be good and the stance, too. Maserati MC 12 looks really aggressive watched from the front. The paint is nice applied having a pearl effect in the strong light. But is a problem here, because the metallic body isn’t finished as it should be. On the shut line levels and around a few angles, some irregular metallic residues can be seen. Isn’t a disturbing fact when the model is exposed, but when you are coming closer or try to take macro shots to it, is easy to observe. The front grill isn’t perforated, but has a beautiful photo etched metallic part to replicate the Poseidon’s trident. I don’t know why they’ve used here full grills, how long all others have real meshes. Maybe, their hidden position, made the manufacturer to believe, that are hard visible.

The badge on the front lid is tampo applied. The lights are looking good, having the background colored in blue, but the lateral turn signals were only painted. I like a lot the air vents on the real car’s lid and they’ve replicated them very nice on the model, too, keeping the right dimension. Moving on the lateral side, the air vents are covered with real mesh this time and again a metallic photo etched part replicates the trident on the door's pillar. The Italian flag is tampo applied. The front lid is fixed with clamps on the real car. Here they mould them in the body and painted after, in silver. Is the cheapest way to replicate them, but not the best. Personally I don’t like the result. The huge spoiler and the rear mask- if I can call so, are a single plastic made piece. But it doesn’t fit the rest of the body, in my case on the driver side, because on the right is aligned perfectly. Is strange and doesn’t look good. But, looking from this side the blue stripes are looking very good and are precise. Let’s move on the rear side, where comparative with the basic version we have the taillights made of plastic and not painted. They’ve used stubs to attach the turn lights, the third stop light is plastic made and the reflective bands are made of a textured plastic. The main details are the perforated grill and the photo etched piece for lettering the car name. The final exhaust pipes must be chrome covered, but Mattel only painted them in silver. 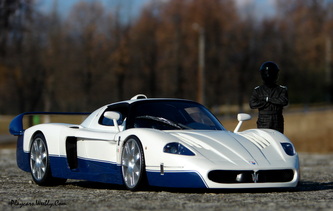 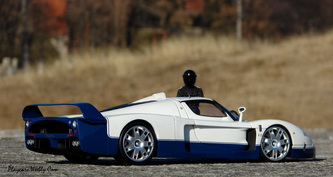 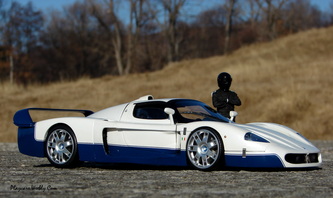 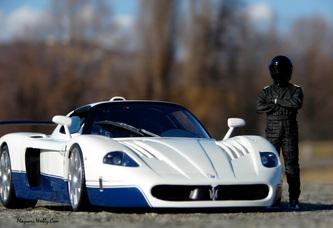 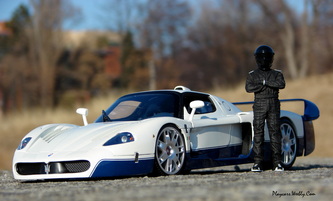 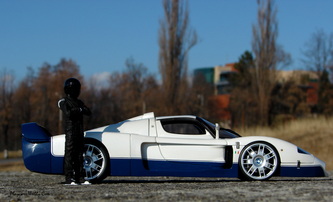 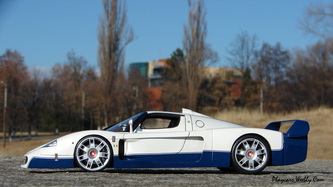 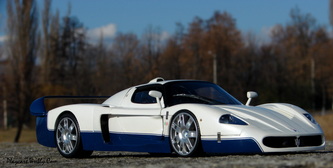 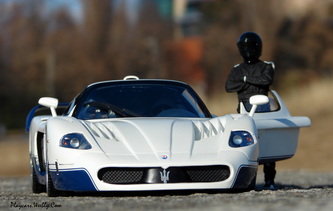 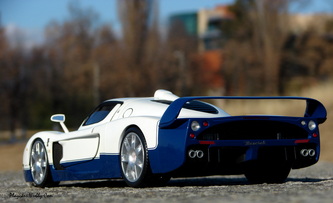 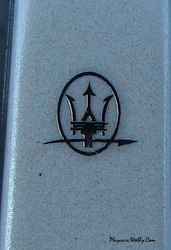 The rims are too big made, even if correct and the tires are wrong, being too slim. This inconvenient is visible and changes the look of the car. For the brakes they used metallic covered brake disks and the huge calipers were black painted and stamped with Maserati name. The center is marked with blue, respective red color for each side of the car. 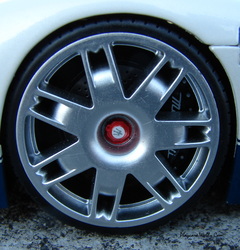 The doors have the traditional Mattel half opened windows made of the same flexible plastic. Not my favorite, for sure. The roof can’t be removed comparative with the basic version. The interior isn’t good finished. They’ve tried to replicate the carbon pattern on dash and back of the seats using textured plastic. On the dash it was painted in silver and looks horrible. The seats look strange, too robust in my opinion, like in the gear shift paddles case, too. The buttons were painted to be put in evidence. For the seat-belts they’ve used textile material. Too much cheap plastic, unfinished and not good detailed, this can be the conclusion for the cockpit. 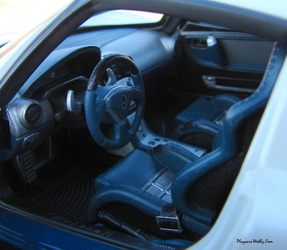 Only the rear lid is opening and comparative with the plastic one on the normal version, here is made of metal. A rod it was a good option, because the huge lid doesn’t stays open by itself. The engine is a good effort, not visible hoses or wires but, many parts painted separately or chromed like the attaching little parts. The suspension is visible and has metallic springs. All panels around engine bay are made of textured plastic to replicate the carbon fiber. I like the central lid branded with the name of the car. The engine isn’t bad, but the presence of some wires or hoses would be great. Nothing can be seen underneath, only the air spliter on the rear side was modeled. 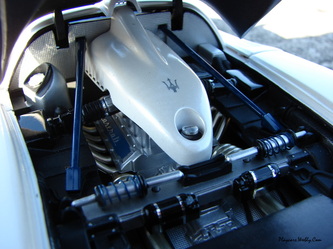 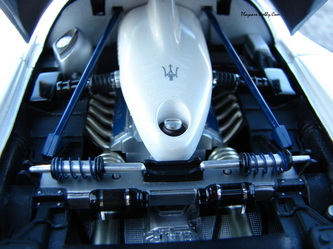 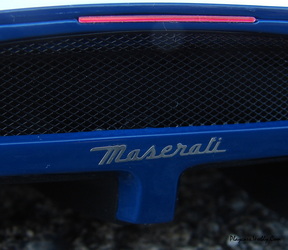 Unfortunately the Maserati model isn’t at the same level with its Ferrari counter models from the same level. Doesn’t have the finish and details of an Elite model. The interior is bad, the exterior is unfinished and the wheels are totally wrong. A lot of details could have bewn added on the model along with their attention in crafting this special model. Is a pity, because aren’t many Maserati cars  replicated in 1:18 scale  and just few of them are replicated by manufacturers with experience. Even if Mattel failed to realize a good model of MC12, is still hope, because this year, in 2013, AutoArt announced their version launch for the next year. And for sure that will be something to see.