Anyone in the business know what CMC means and how they try with every new model to reach the perfection. Out of them league of classic models, being in fact the single and only modern car they’ve ever reproduced is the Mercedes SLR McLaren. An impressive supercar, a must, for the auto models world. Is in my favorite top of real cars and models, too and of course I could not miss the chance to have it in my collection. And I could not resist to a single piece, its attraction, maybe not just in my case, being stronger than in any other model case. Even if the manufacturer name, must recommend this model without doubts, the adverse opinions came quickly after its release. Seem, that the expected final result was a little bit disappointing for many collectors. Are many reviews of this model around, but I will try to expose my opinion here, about the model I have, since diverse regarding the CMC’s SLR. For the first, let’s give a general look to the model, but I must say this was released in a limited edition, every model having a label with its own number attached. Being made of 895 pieces the model give the impression of a solid and well put together ensemble. It is having many metallic parts and the weight is considerable.

The level of details is insane, believe me that in 20 years of collecting I’ve never seen such a replica of a modern car never before the SLR or after it. Everything is accurately done and finished conferring to the final piece an immense note of realism. But, of course nothing is perfect and the SLR has its lacks, too. I will speak first of this dark parts of the models, if I can call so, facts who have generated a lot of debates, disputes and blames, everywhere die-cast models are the main subject. The size of the wheels was criticized to be wrong scaled and small in diameter reported to the real counterparts. We are talking about maybe 2 millimeters, but on a 1:18 scale model it equates to about an inch and a half off in wheel size on a 1:1. In fact, the wheels are actually correctly sized, 1’’ diameter on the model vs 18’’ on the 1:1. In conclusion the sidewalls of the tires are too tall and wheel arches of the model are made large to fit them. For me this isn’t a problem at all, I don’t find that the lateral look was been affected by this. I can’t say the same thing about the roof line, where the door edges are too tall comparative with the roof line. This is a visible fact, but all people are focusing on the wheels problem and I never seen a single complain about it. At least, another disputed argue is the front hood alignment and the huge space resting after closing it. Is a true fact, but I don’t understand how people can be disturbed by this fact. The gap isn’t so big in reality and from my experience with every SLR model I own, pressing a little bit harder, the bonnet will close perfectly.

With these out of the way, we may finally begin with the review. The general line, aside the aforementioned door edges, is good, the model captures the stance and the form of the real car quite perfectly. Paint is very glossy, thin and smooth- I won’t put in discussion the silver metallic version problems, because I don’t have it and never seen it closer. Fit and finish on my examples are good, with fine shut lines. The engine lid is made of stamped cooper and enabled the manufacturer to mould perfectly the intricate shape while keeping the piece thickness true to life. There are elaborate fins towards the rear of the hood which are also mirrored on the side of the front fenders. Each fin is made of a separate piece and they form gills that are shark like in appearance. The hood also surrounds part of the headlights and the three pointed star. Headlights are beautiful made without visible attaching stubs. I can’t say the same thing looking the fog lights attached with visible big stubs. All the air vents are covered with real mesh and the Mercedes three pointed star is covered in a perfect chrome.

From the lateral side many others fine details can be easily observed. The model lettering is a metallic photo etched part and the exhaust pipes are perfectly done and looking, being metallic. The door handles are individual photo etched parts. What is annoying here are the side indicators included into the mirrors, because are attached with a visible stub and coming over the general line of the entire piece. I will speak now about the best feature from the exterior, the gull wing –wing doors. These are extremely well modeled and true to the 1:1 car, both in terms of form and function. They swing on exceptionally tiny hinges, just like in the real case and while made of metal, look to be quite fragile. The doors ‘lock’ with a spring loaded ball / dimple mechanism which give the model a very solid feel.

The wing mirrors, mounted on twin stalks, are faced with sturdy looking ‘mirror’ pieces, unlike on lower end models where stickers are used. Even a strut was included for each door and last but, not least CMC took the time to put a realistic metal catch, attached by two small screws, on the end of the door itself. The fuel cap is an separate piece and can be opened. On the rear side the taillights are good replicated, having the LEDs segment done but not very realistic. Real mesh for the air vents and metallic photo etched parts for the initials and logo were provided. The great job here was concluded with the functional air brake system. This part is again well modeled by CMC, who chose to make it out of copper, giving it an accurately thin profile 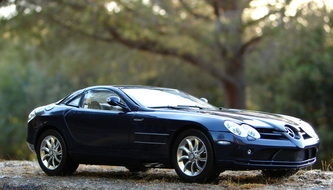 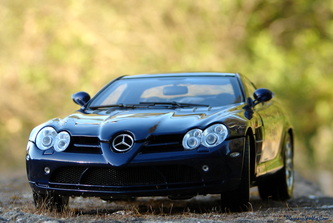 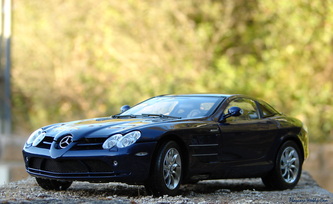 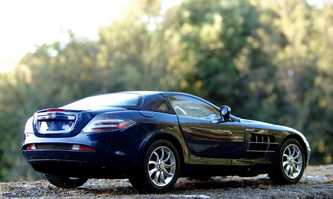 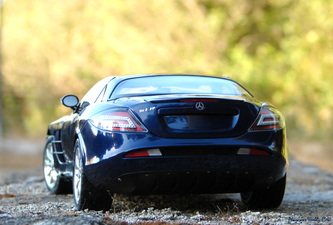 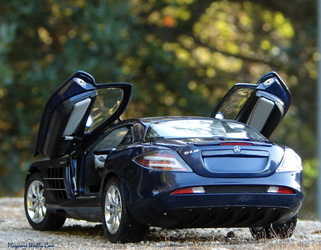 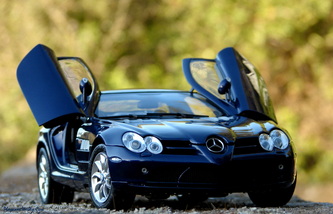 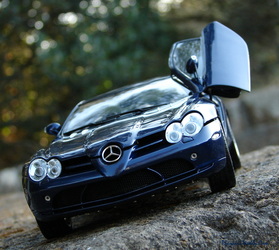 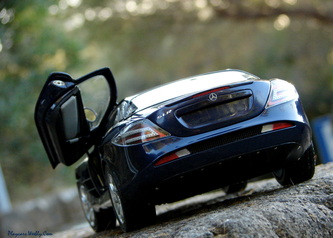 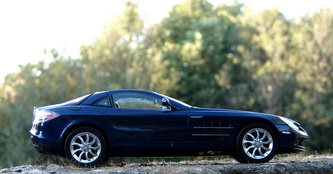 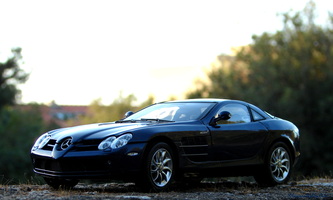 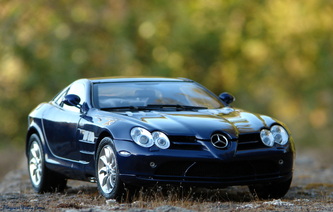 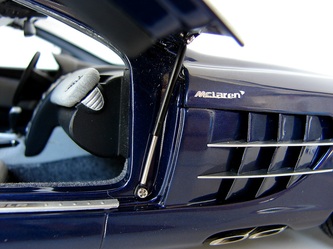 Looking closer at the famous from now wheels, the rims are made of metal and painted to look like the real alloy. The turbine design is accurately modeled and even the valve stems were amazingly replicated. I would like that the lug nuts to be separate and removable piece, like in the BBR’s Enzo case. All four wheels are fully and independently suspended with coil springs and cast metal arms. Tires are marked with Michelin logos to the point where I think CMC has gone over the top with them: you can literally read off the speed rating and tire sizes off the side wall of the tires. Brake system was poor replicated  in my opinion, the brake disks were kept grey to replicate the carbon from the real ones and calipers were silver painted and stamped with Mercedes logo. 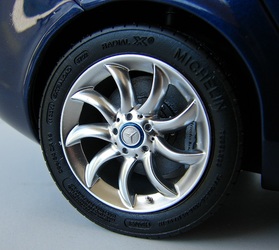 CMC proved their class, crafting the interior in a fabulous manner. Both seats , a part of the dash, center console and door linings were covered in real leather. Every color variation of the exterior body has a different colored interior. The seat belts are textile made with photo etched buckles and the floor is carpeted. On the center console buttons and controls are very well recreated and the experience continues with the perforated speaker on top of the dash. The ventilation grills are very well replicated being cut through, the sun shades are functional and a legible sticker represents the main indicators. The steering wheel is finished to look like leather covered and includes the paddle shift buttons. Only a sticker was applied on door entries, but has a good effect. Once again the interior is incredible well made and just think, provides a sweet smell of leather every time you open the door. 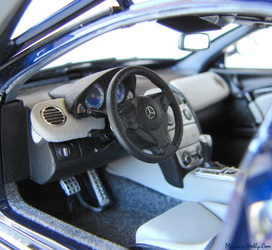 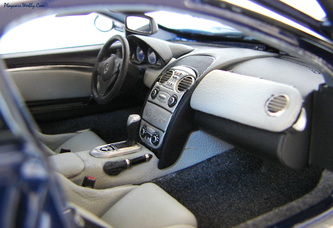 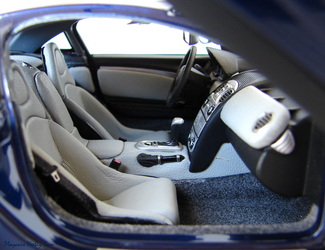 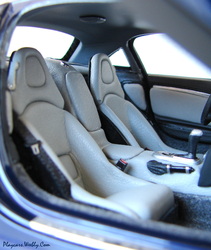 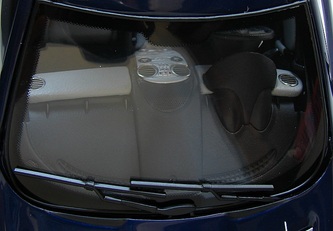 For now the most impressive part, a masterpiece of CMC: the engine. Is the best made engine I’ve ever seen on a modern car. The engine cover is lined on the inside with foil like material and opens up clam shell style on complicate strut hinges perfect replicas of the real ones. Hoses and cables abound, both braided and rubber sleeved types. There are the tiniest of labels which you can almost read off. Many separate pieces of the real engine are modeled as separate pieces. For every hose, there is a clamp with miniature screws to attach it.  Reservoir caps are marked with the appropriate scripts.  Tiny screw heads are littered all about the engine bay and if you look hard enough through the delightful bramble of wires, you can see the real engine. The trunk is carpeted and features a separate matt with black piping-really nice. The undercarriage is simple made but complex looking, with every rivet head individually made, the air splitter on the rear side moulded and 2 fine made metallic grills of the heat extracting system. A small part of suspension is visible, too. 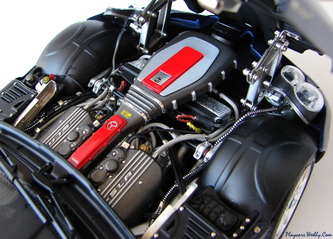 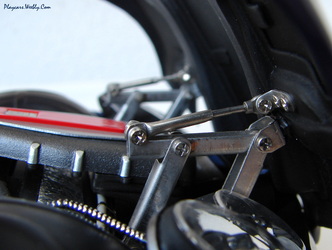 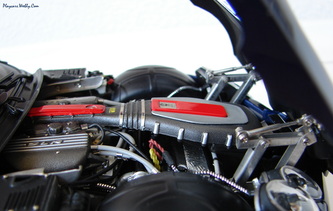 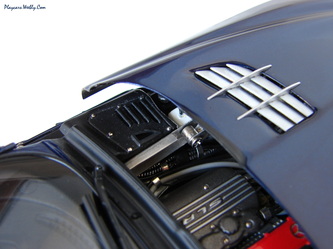 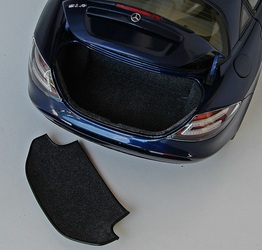 What else can be said? This is definitive a masterpiece an awesome detailed model, which offers so many good parts to enjoy in detriment of the few lacks. Is a very rare model at the date when this article was wrote and seems to be a very good investment for some sellers. If you already have it, just enjoy it, is brilliant!