The beautiful Murcielago Roadster could not be a missing part from the AutoArt Lamborghini line. It was released in two versions: the concept and the street version. Being newer than the Coupe model, the differences of detailing and finishing are superior. Is a very good looking model keeping precisely the shape of the real car and the low stance. The body was covered in one of the most beautiful shades, very well applied on the model, without differences between the painted plastic and metallic parts. Is glossy, thin and metallic. Looking around the model we can easy see a lot of beautiful details: lights accurately done, turn lights made of plastic and not only painted like on the Coupe version, real metallic meshes for all the air vents. The quality level was increased and this is very good in comparison with the Murcielago Coupe. The Roadster still keeps the plastic made bumpers and sills. Is light, but not fragile. The car logo placed on the front lid is a raised part, visibly more better crafted this time. The photo etched metallic Lamborghini inscription on the rear was kept. Unfortunately the plastic piece between taillights wasn’t replaced with a real mesh and the third stop light is still painted. The final exhaust part is chromed and moving on the lateral side the beautiful line of the roadster was concluded adding door windows. The labels on the both lateral sides are tampo applied. Crafted to look like a raised part, the fuel lid is chromed and has the car name moulded on. 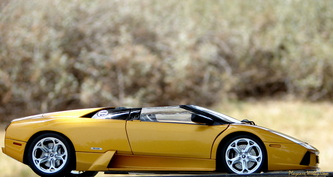 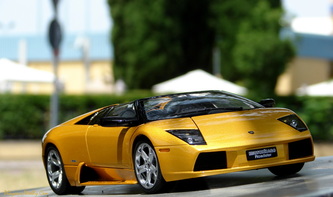 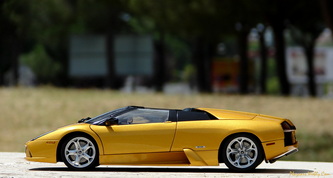 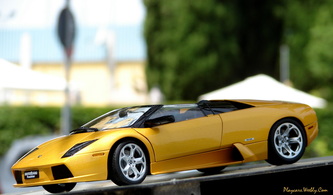 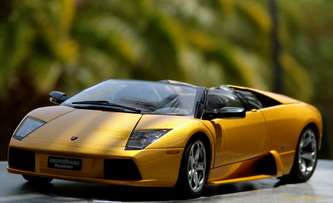 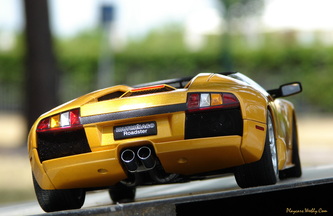 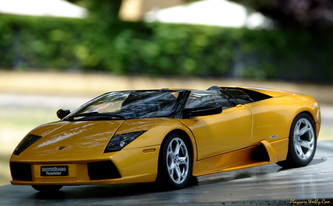 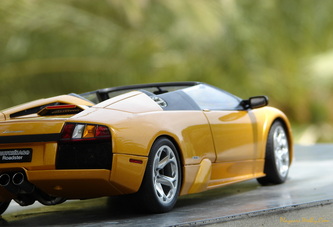 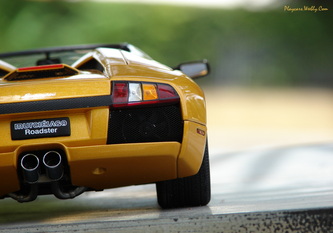 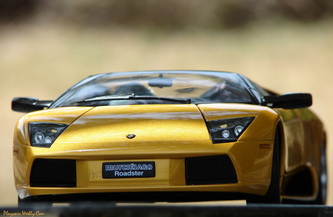 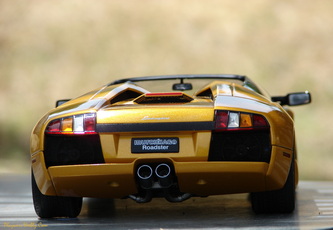 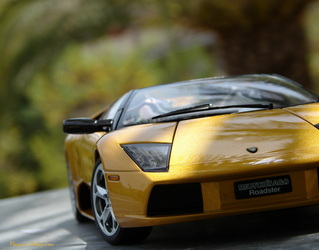 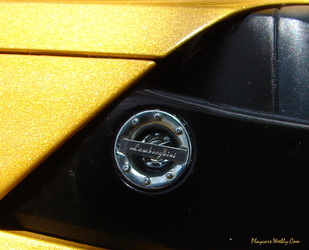 Of course the special designed rims for the Roadster version are wonderful replicated. Are precisely done, with individual rivets and car logo placed in the center. The same great finish is available for the brake disks, covered in metal and cross drilled. On the calipers the “Lamborghini” inscription was marked together with a black painted background. 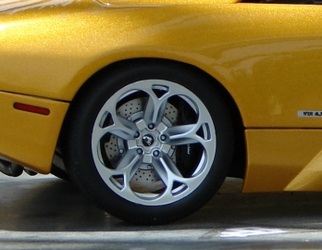 The doors can be opened using the same spring mechanism and can be activated from the same button on the superior part of the door , an annoying way, if you are to asking me. The springs are too slack to keep the doors open. The interior is carefully made and better finished on this version. We have individually marked buttons on the central console, carpet, real made textile seat belts and carbon texture on the steering wheel. The indicators are replicated by a sticker and are legible. Only the gear knob is a little bit over sized . 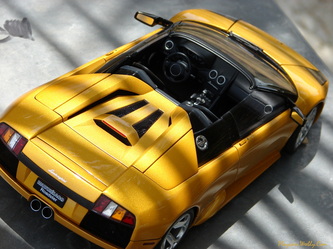 Opening the rear lid the engine appears with a decent look. Contains painted parts, labels and the Lamborghini lettering on. No cables or hoses are present. The grill next to the engine is a beautiful photo etched piece. A part of the body resistance frame can be seen over the engine bay, but it isn’t detailed with a carbon look to replicate the real one. All ensemble lacks some details but is decent. The front lid reveals only a carpeted space, under it and nothing more. Underneath a part of rear suspension, the exhaust and gearbox are the only visible parts. 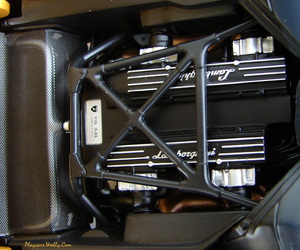 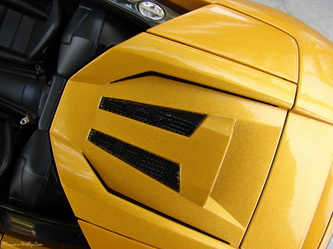 The Murcielago Roadster version is a good model, rare now, especially the Concept. It is better done and looking, than the Coupe version and more detailed. For sure a Lamborghini collection would be incomplete without it.