p       l        a        y        c        a        r        s
It is for sure the only racing car model that I really wanted to add in my collection. Is in the same time a dynamic memory who marked my teen age DTM's experience and the hero on The Ring when I was playing Gran Turismo all days back in time. Is an Alfa Romeo and this could be another reason, but not an ordinary one and that Alfa that has eaten all the proteins and vitamins during its childhood and suited all the requirements for the bodybuilder position. It was 1993 the glory year for the DTM, the german touring championship and the moment when to promote the serial 155, our personage came into the light with the indicative 155 V6 Ti DTM. With a top technology on board, a four wheel drive traction system, a V6 engine that revs at 11.000 rpm, an entire carbon fiber body, that car was born to become a legennd.
This successful race car was reproduced in 1:18 scale by UT several years ago, covered in various liveries and recently by HPI, but with a closed resin made body. The success sells well and inspired by the car's pedigree, Autoart put all its efforts to create a high detailed product and give to the racing enthusiasts a model car to be proudly displayed in their cabinets

Released in the Signature line, the model was expected to reveal high details, as usually a race car reinterpretation does. It comes in the classic Signature box, having the front bonnet and both antennas packed separately. A brochure and a single numbered certificate can be find in the box. From the first sight the product inspires quality and attention for details, but how far the manufacturer went? This model features four opening doors and two removable bonnets. They chose to keep the rear one fixed on the model with the same annoying metallic wire and to remove it, must be unscrewed, a real inconvenience when you want to pass quickly to observe your model for the first time. The paint is good, keeping the right shade of the original, with the exception of few places on the roof, where the paint seems to be consumed when you observe it in strong light. But this could be a problem only with the subject of this review. On the other side, the livery is great done everywhere. Autoart claim that is made of more than 270 separate pieces and the body is entirely produced in metal, so the model results heavy and well put together, keeping the right proportion and a great stance. 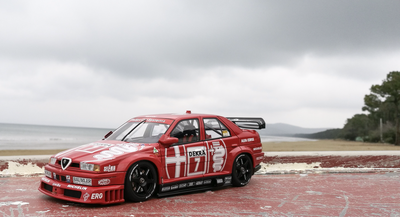 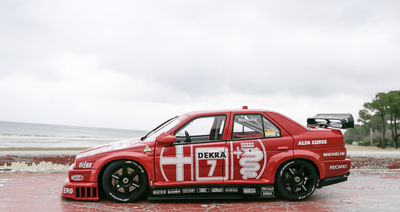 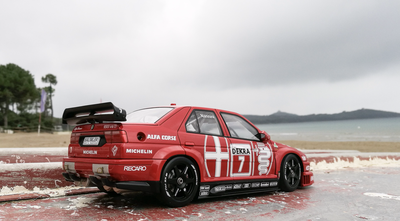 The front side is uncovered and we already can see the engine ensemble, made entirely from separate pieces: lids, tubes, pipes and flexible wires. It is wired and plumbed and some parts are individually painted. Speaking about engine, will be maybe too much for a lot of you, just because the engine is covered by the huge air box. But I assure you all the engines components are in place, painted and properly shaped, even the Alfa Romeo inscription on the block. Some textured parts remember the carbon fiber that abound on the real thing. Many parts of the resistance structure are visible, but as an annoying fact, are still keeping the mold residues on their surface, reminding me the unfinished plastic toys back in the days. If we are to ignore this, everything here looks nice and clean. The front bonnet can be fixed in place easy, using two moulded pins. Together with the front spoiler creates a beautiful ensemble. All the air intakes are beautiful cut through and covered by real grills with different patterns. 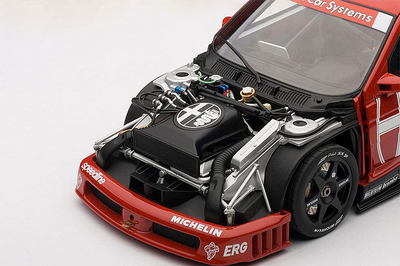 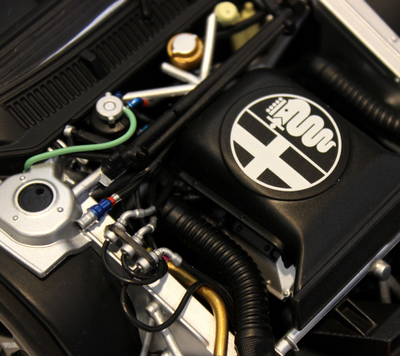 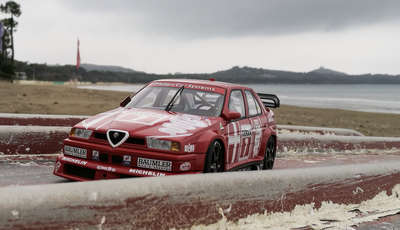 I really like here the Alfa' logo, the metallic tow hook developed as a metallic photo etched part and the metallic springs on both sides, used on the real car to fix the bonnet. I must mention the fender's lips for the all four wheels raised as single metallic parts. Even if are hard to be observed, hidden by a decal, the lights are keeping the light bulb insight and are beautiful done. The attention for details can be observed looking at individually painted bolds on the bonnets, the integrated air vents in the mirrors and I'm happy to see that the turn signals presented even on this race car are beautiful separate parts right under the Quadrifoglio decal. 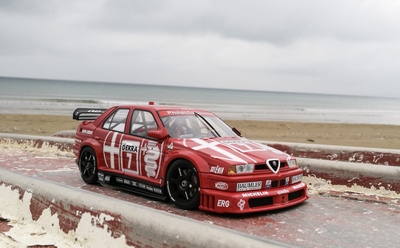 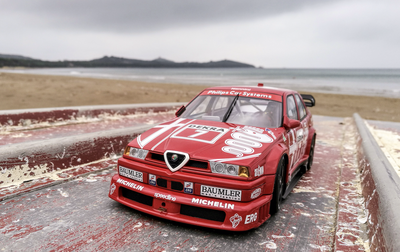 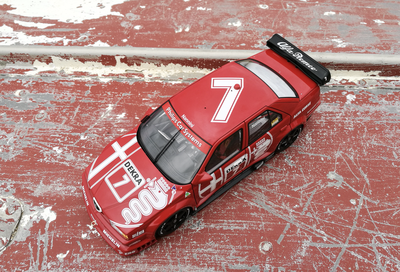 The rear bonnet can be removed in the same way and the details are in place. The carbon fiber and what is supposed to look like naked metal represent a good touch here. Outside we can see two tow hooks and the famous upside faced exhaust.

Speedline rims are branded and together with the great detailed brake system add class to the model. The view down here earns points being helped by the tires, entirely branded and made of soft rubber to feel like the original thing. Great job! 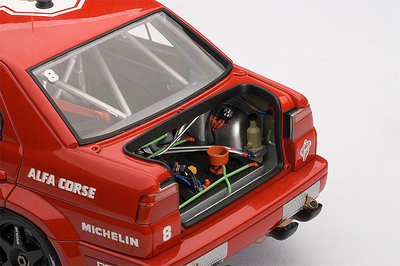 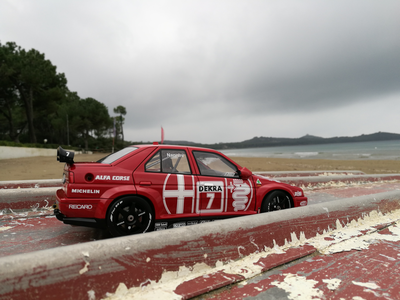 Before opening all the four doors, must say that the gaps on this model are minimal and just in scale (see Autoart, you can do it without composite, as well). An opening tool could be useful here and the interior is typically racing. Details are great and rich: tubes, wires, switches, the rolling cage and the textured carbon space on the rear side or on the dash. The shell seat is nicely profiled and covered in a rough material for more realism. I really like the steering wheel, thin, rough and Momo branded. I don't agree with the plastic made safety belts, the fabric made one would be perfect and the kevlar pattern on the back of the seat could be look more realistic.

​A quick view underneath doesn't reveal something special, only the suspension, too poor looking for me, compared to the general level and the exhaust system where they add a decent "hard used" effect. 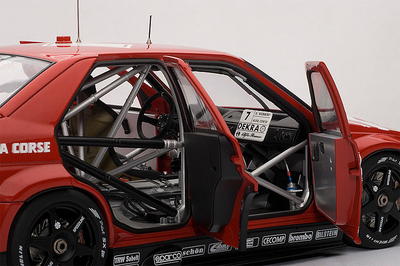 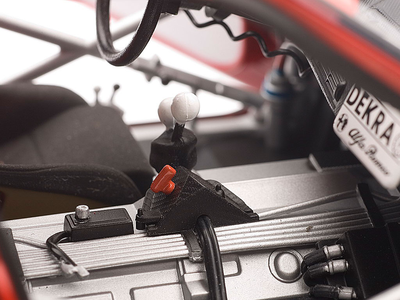 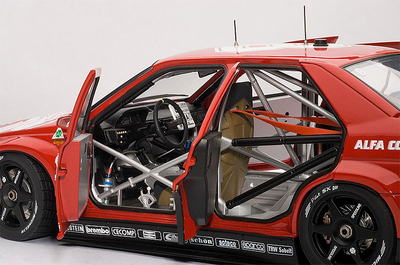 ​In the end of this review I can say for sure that I enjoyed this model a lot. Is the best reproduction from far, an excitement for every race car enthusiast. Is well detailed and carefully finished, you can think that it was developed by a true Alfista. For me will always remain the perfect incarnation of Alfa's motto "Cuore sportivo"!
All rights reserved. Playcars- Auto models Biography 2017
Powered by