Lamborghini Murcielago is one of the first Lamborghini replicated in 1:18 scale by AutoArt. Is an old mould having almost 7 years now, when I’m writing this review(2013), being a second generation model of the Performance series. I’ve searched a while for the rare Verde Ithaca shade, which fits the model perfectly, in my opinion. Is a shinny, well applied paint, but a little bit tick if we go to compare it with the newer models. The model is light because the bumpers, engine hood and sills are made of plastic. On the front, the lights appear to be well made, without visible stubs, but the turn lights on the sides are only painted. This model doesn’t feature real meshes for the air vents. They’ve chose to replicate them with a transparent plastic base, having stamped on, the real grill effect. Not real license plates were added, just plates including the type of the car. On the bonnet, the Lamborghini logo is a raised piece, but is looking more like a decal.

On the rear side the inscription is a metallic photo etched piece. And on the same side we can see the taillights, nice looking and the final part of the huge exhaust pipes chrome covered. They were carefully in replicating this details and the result is great looking. The grill situated between taillights is made of a textured full plastic base, not the right thing you’ll want to see there. The spoiler is functional. Personally I don’t like the position of the huge screws holding the rear bumper. For sure, they could find other place to fix them. Even if aren’t visible when you are looking to the model, are creating a bad contrast near the final exhaust well replicated. But is a matter of taste here. The lateral air intakes are functional, but can’t stay open by itself, as in the major cases. 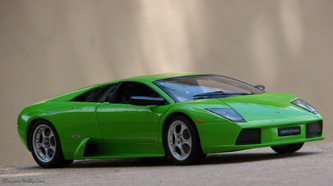 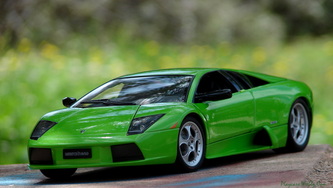 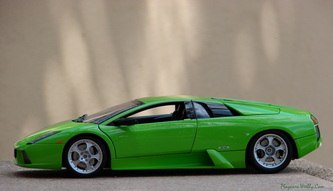 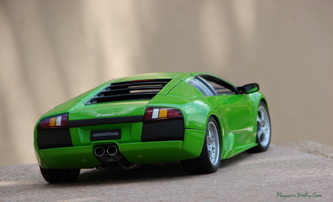 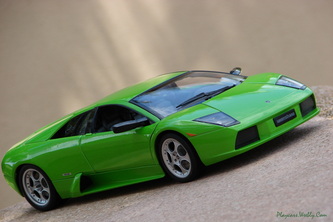 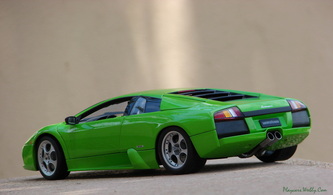 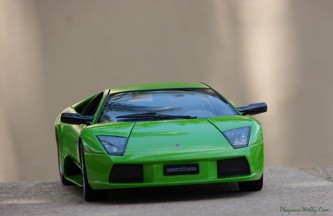 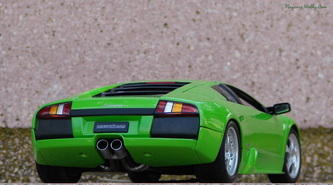 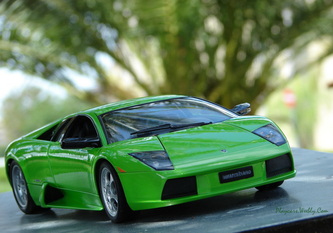 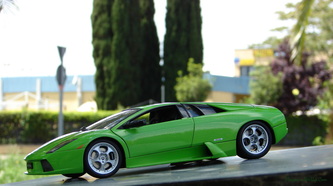 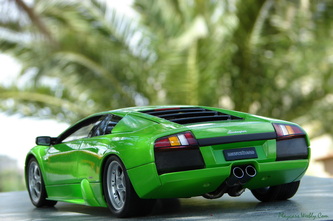 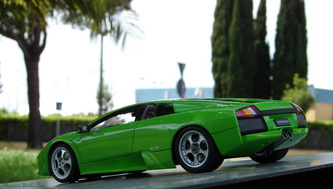 If is something really looking good and well crafted on this model for sure the rims and brake system are that parts. AutoArt always did a great job here with all models, irrespective of generation. The rims are perfectly replicas of the real ones, having the rivets and studs carefully finished and the car’s logo stamped in the center. The rotors grip rivets are also visible and looks like real. A thin metallic coat was applied on the brake disks  to replicate the real steel. The disks are dimpled to fake crossed drill. Black paint and Lamborghini inscription were added on the calipers surface. On the tires profile the “P zero” mark can be seen and the size is generous like in the real case. Very good job down there! 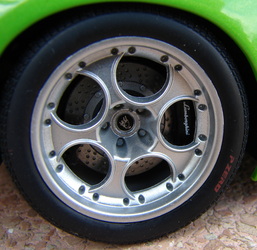 Opening the scissors doors we have the same problem: don't remain open. Is already a very annoying fact for all the Lamborghini models which feature this door system. AutoArt failed here every time on the old generations of Lamborghini. This model has no door windows. The interior is decent made. We have carpet, moulded buttons individually marked on the central console and stickers to replicate the main indicators. The seats are painted in 2 colors and the seat belts are textile made. Some parts like the steering wheel are not well finished. The interior looks simple like on the real car, not many details could be seen inside.

The bonnets can be open and how you can guess, is impossible to fix them in this position.The engine has painted details and some rigid hoses replicated. Is marked with the name of the car manufacturer and all the surrounding panels of the engine bay are finished to replicate the real carbon fiber. Not many things could be said. For the age of the model and the simple look of the real piece, I can say is a pretty nice work. The compartment under the front lid is carpeted. Underneath the rear suspension is visible, featuring real metallic springs. The gear box and the differential are also visible. 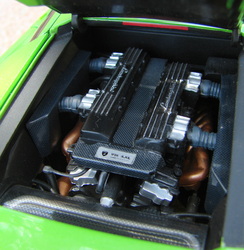 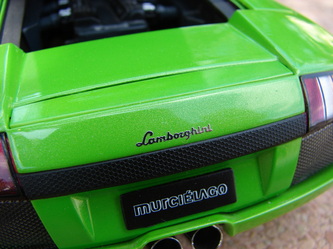 This is a model that would look awesome with an upgrade. I understand that some version were revised by AutoArt soon after the model release. I never seen one in real life.  When it was released for sure the model was impressive with all its opening parts problems. Looking at it now, looks cheap, but is a model to have, in an insane color, for a super car enthusiast.