Being the first truck built in Germany after the Second World War, Mercedes Benz L6600 is known better as “the truck that rebuilt Germany”. The model is an old release of Minichamps and was built in many versions and scales. I will take a look here to the Aral tank version in scale 1:18. In the moment when the “big boy” arrived it confirmed my expectations about its impressive size with and outside the package. But, is not so heavy comparative with its dimensions, many parts being made of plastic. The package is made of polystyrene and covered with an exterior card box having printed on photos with the model and some images with the real truck as well. The mobile parts are secured with little adhesive plastic parts to avoid their opening during the transport and between several parts, like in the engine compartment small pieces of foam were included to give some more protection. Like I said, the size is impressive, the model being almost 50 cm long. At a first sight seems to be well put in scale and detailed, but fragile in the same time. For example the doors are not staying closed and mobile mirrors will move every time you’ll manipulate the model.

Must be careful at the fragile Mercedes star in the front side, too. The paint is very well applied, without differences between metallic and plastic parts and the stripes and lettering are painted everywhere as well. Front lights are exemplary made, their covers are very closed to the real thing. For the light signals up to the cabin they don’t put much effort and only painted them in white. The generous mask is made of plastic, but well made, the “deep” effect of the grill is visible even if has not a real cover mesh. Mercedes logo is a fine separate piece, but fragile as I describe it above. The engine hoods have plastic made handle parts on the exterior side and is opening on fine hinges. On the right front side a little air vent was replicated and covered with a real mesh separate part. Doors is opening on real-like hinges and have the handle parts made of plastic. The wheel’s fenders are made of shinny unpainted black plastic and include in the front side the foot’s access zone replicated by textured plastic parts, painted in silver to replicate the aluminium counterparts. On the real truck the mechanic could climb this zone for an easy access to the engine bay. The front bumper, if we can call so, includes two tow pieces and the license plate specific for that period. 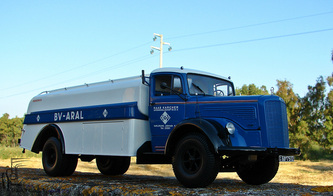 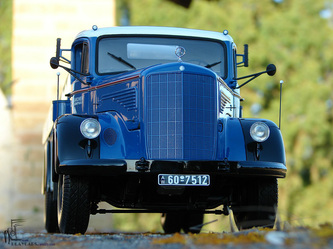 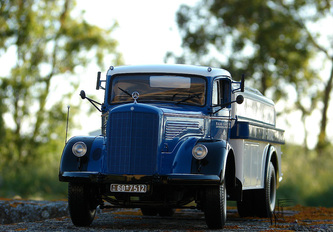 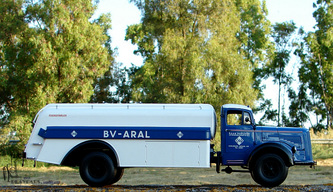 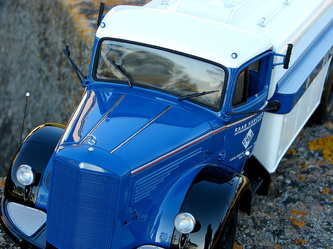 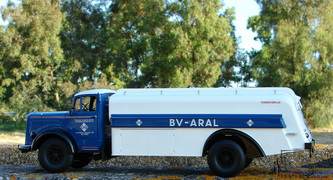 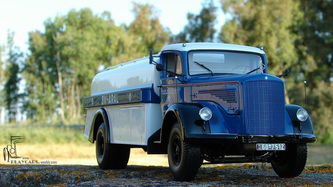 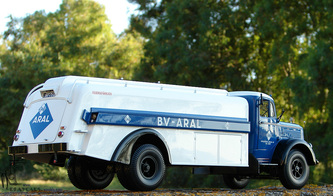 The fuel tank is made of plastic and is nicely detailed in its superior part with valves and taps individually reproduced and painted. Again, the access zone is great replicated and textured giving a strong real note to the whole ensemble, the little step’s stair being cut-in. Long to the fuel tank is a compartment which can be accessed opening the little door and is lodging two hoses made of rubber. On the rear side the lights are made of translucent plastic, having the correct shades, but being attached with visible stubs. Are surrounded by a nice chromed frame. Opening the rear panel we have access to the “command panel”. A lot of valves and taps individually made and painted, pipes and removable caps secured with thin chains are creating a great ensemble. The pipes are very realistic made having the rivet’s heads modeled on. Very nice detailing here! The small reflective parts were only painted, but looks decent. 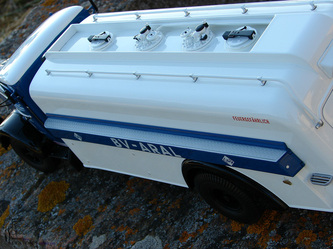 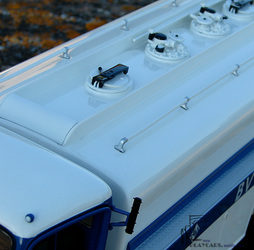 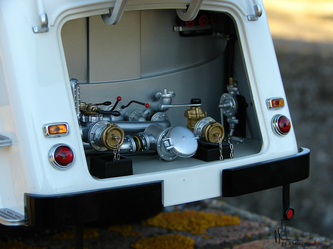 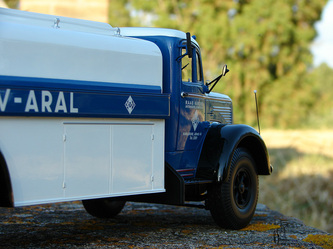 Moving back on the front side we can take a look to the engine bay. Manufacturer did a great job here, too, replicating the typical 50’s engine in a great way. Are many separate parts, individually painted, fine pipes, lids, even some warning labels applied on different parts and chassis. The pipe’s attaching parts were separately painted in silver and are looking very well. 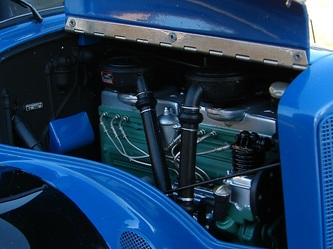 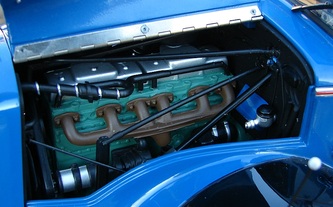 Opening the doors, is easy to observe that they succeed in giving the proper note to the interior. Is simple, common for a truck from the 50’s, made using qualitative materials and well detailed. Has rubber carpet and the seats are covered in a soft and textured material. Pedals keep the right shape and are nicely detailed and the dashboard’s indicators are replicated by legible stickers. 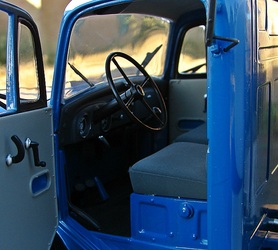 Rims are plastic made and without great details to be replicated on the real thing, are keeping the simple look. Tires are soft enough, but are not marked. This could be a great note if they chose to do it.  The undercarriage has several interesting features, starting with suspension, transmission, spare tire, ending with the bottom of the engine block. The suspension is made out of plastic sheets. 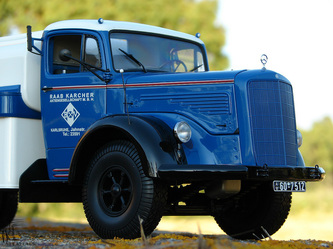 Personally I’m very enthusiast about this model presence and manufacturing. Is very original, well finished and detailed and brings with it a part of the past years. Displayed along with other models will be something special and will capture a lot of attention. All the versions are interesting and provide some different details. Many of them became very rare and the actual prices reflect this, along with its colossal presence, not necessarily the manufacturing level.