p       l        a        y        c        a        r        s
The super cars world represent a wide source of inspiration for the actual model cars  manufacturers. I've seen a lot of collection and with very few exceptions, every display fits at least one modern performance car.  Could be for the performances of the real car, the challenging design or the details, but what is for sure, having such a scale replica for every collector is a joy. Are equally desirable in  scale as the real thing could be, just if you can afford it. If for many of us the real thing remains almost for the moment a dream, nothing will stop us  to enjoy our models. I owe the passion for super cars to the McLaren F1, who stays proud in my exotic dedicated cabinet since its first appearance . I love McLaren cars and little by little more of their replicas come to complete the sequence.
And if is enough space for the super cars, why not to pass to the new next level of so called hyper cars? Since McLaren opened the game here with their fantastic P1 model, I have one more reason. For the street version, you won't spend many time to take a decision, because you have only two possibilities: AutoArt or TSM. I love TSM models, you know from my review I was impressed by their F1 LM, but in this case, for the P1 I decided to go with AutoArt.
If, for the F1 I pulled the trigger instantly, for the P1 the desire was somehow weighted by the endless price increasing for the Autoart models and the composite material extinction to the Signature line. I was already common with the new material, without decide if it was a good or bad option. Somehow, I'm still partial to the metallic models after almost 20 years of collecting.

The Autoart replica is the most complete in terms of details and functional parts, if I follow the manufacturer specifications. The model was replicated in the Signature line and is hosted by the traditional package, along with an authenticity certificate, an opening tool for all mobile parts and one for the rear spoiler and a brochure. They claimed that this model is made up of 346 separate pieces and managing the entire box you'll realise that thanks to the composite , weights only 0,63 kg, exactly how the producer declared.
The rear bonnet and the spoiler are packed up separately  for safe reasons and if the engine bonnet comes in place very easy, I can't say the same thing about the spoiler.  From the first contact, I realize that the composite material has influence only on the model's weight not on its general aspect, too. I can feel it well put together, without fragile parts, except the moment when the rear spoiler is „activated”. All the mobile parts are kept closed by few magnets and this is very helpful when the model is managed. The stance is great and all the design lines, curves and air vents are following the original car design very well. But, the good experience stops here. Let's sum up quickly the reasons why Autoart chose to use the composite material: costs (I'll speak latter), easy to work with ( I understand this), better accuracy for the mold (maybe, but not here), smaller gaps (definitively not!). Taking a look, before buying, at the photos of various collectors and reading their opinions, I've seen and understand that the model has some problems with the front bonnet alignment and the gaps size, if not the same as before, even bigger. If the gap's size wasn't decisive for me, I was hoping only the alignments to be right. 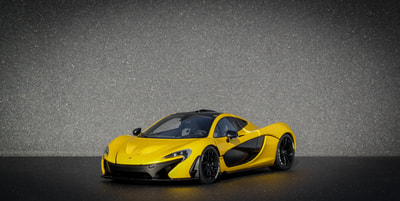 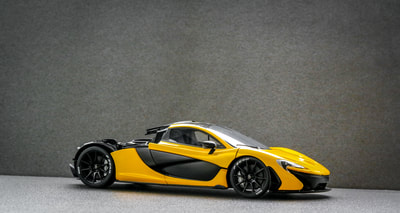 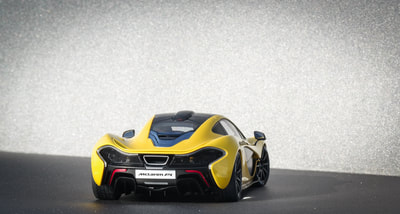 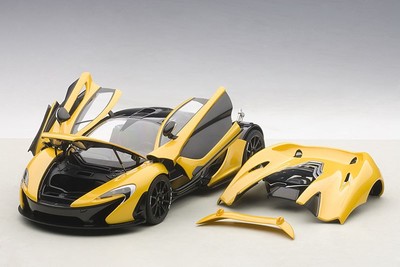 In reality,  everything went worst, because the front fenders and the doors keep a huge gap and the left door can't be aligned properly with the rear bonnet.  The right hinge pushes up the front lid  for an unknown reason and the result consists in uneven spaces on both size, just what I've seen on other models. And if we are here, must be mentioned that on their superior part, both fenders are not well finished, letting the plastic effect very visible. I consider all of these to be serious issues, visible from the first eye contact, disturbing and  not very common even on a 20 euro model. I'm very disappointed about the way they finished this brand new model.
The entire model, was developed around of a metallic structure, an interesting fact, and this is visible on the rear fenders, the engine frame and on the roof. The paint job is amazing everywhere, without imperfections, glossy and having a beautiful pearl effect and I can be positive, too, for the way they replicated the carbon fiber. All the carbon effect was printed on the parts and looks fabulous even on the small parts like the windows frame. Every air vent is covered with real mesh and very realistic replicated. The lights are true to the original and if they were successfully in replicating the rear LEDs segment, on the front, the silver painted line doesn't have the same effect and looks really poor. The third stop lamp is present under the beautiful perforated grill and right next to it I can't not observe the functional flaps. 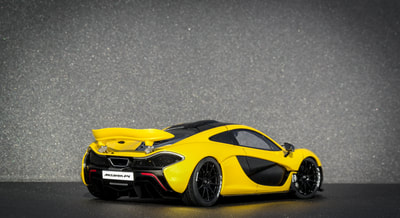 The wheels are precisely done, featuring photo etched logos for the central cap, marked tires and detailed calipers and ceramic look a like discs for the braking system.
Both doors are opening easy on realistic hinges and what is more important are keeping their position. The interior seems to be well reproduced, but not so good detailed for my expectation. I like the carbon frame, excellent replicated by a shiny printed lyar, unfortunately changed when we are looking to the central console and the steering wheel. The uninspired textured plastic took its place here for a not so good effect as before. At a first look I thought the seats and the steering wheel are made of the same textured plastic, that once reproduced so good the real Alcantara on the old Autoart models. But not, is just flat plastic trying and almost succeeding to take in your sight. The steering wheel is keeping well the original ergonomic shape and fits in the center the same photo etched logo. I'll mention the carpeted interior and the fabric made seat belts with photo etched buckles and not in a positive way the coarse pedals. On few very old and cheaper models, others used photo etched parts to replicate it. Not to say that on my model, some signs of the hard work inside the cockpit are still visible on the dash and one of the seats, making me again to ask myself if from a mistake I didn't received one of their molds. 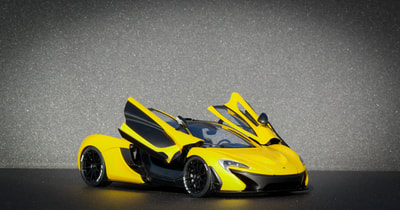 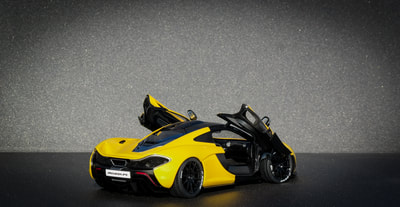 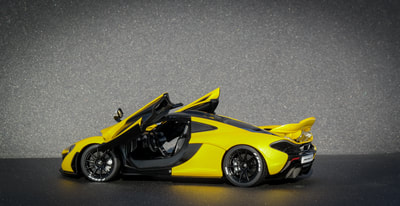 The front bonnet is opening on real looking hinges and is kept in position by two struts. Nothing can be observed there, only a little compartment and the textured plastic frame surrounding it.  As I said, the rear spoiler and engine bonnet are already out of the model and the wide opened engine bay is easy visible. The engine is well structured, with individual pieces, hoses and cables, but again not detailed how it should be and entirely made of flat plastic. Just imagine in all this mixture of pieces, they used only a metallic piece to replicate the final exhaust system, four photo etched parts to replicate the radiators, two of them almost covered by flimsy plastic vents and three coil overs always for the exhaust pipe. Lately, I understand that for license reasons the engine bay should have been kept closed, so I won't comment anything more, even if I'm sure that with a permissive license the result would have been the same.
But, what I can't really understand is why they chose to operate the rear spoiler using a „tool”, when few years back, on the Veyron the same system could be operated from a button underneath. And all of this for less money. All the system is very fragile and on my model the spoiler was not easily convinced to resume its place. 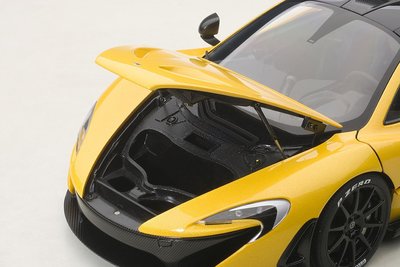 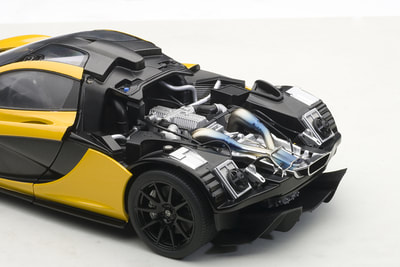 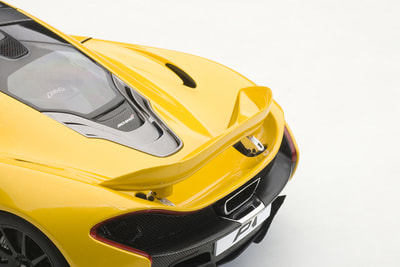 I've found on this model many mistakes, many of them are QC failures, unacceptable for the money I've spent or for the segment where this model should be placed. If I should keep it exposed, than all of these problem should not be mentioned, because in the cabinet it's looking very well. But when I buy a model from this range I' m looking for something more than the way it looks. And here the Autoart's P1 has disappointed me. And isn't about the new material at all, is about the way they assembled it, the lack of details on the interior ( I'll not mention the engine bay), the poor rear spoiler. I'm still wondering how my model passed the QC, if they have any and I can't stop thinking what something else I could buy instead of the P1, models without all of these problems. I don't know if I'll try another model, maybe I'll be more fortunate about some finishes, but I'm very sorry to say that the Autoart's P1 doesn't fit my expectations and after this experience, I can't be skeptical about the following  Autoart models.