Minichamps is the only manufacturer who released this model in 1:18 scale. Even if, I prefer the Coupe better, I thought to find a company for my red CMC. The shades are diverse, the Roadster’s paint isn’ t metallic and is a little bit lighter, but still make a nice couple together. It comes in the Minichamps traditional polystyrene package and a second card box printed with the real car’s photos. Is already known that the models of new cars are poor made by PMA and the detail level isn’t from the range they are pretending to be. But, let’s take a closer look to the SLR Roadster. Is a heavy model, with correct proportion and stance. The paint is good applied, glossy but painted in a thick layer. On the front, the headlights are nicely made, without visible attaching stubs and this is valid for the fog lights, too. The air vents are not covered with real mesh, unfortunately and this is disturbing, especially in the front side where the air intake is bigger. I don’t like the side signals included in the front bumper, which are made of a matte white plastic. I don’t understand the reason why they have not used a translucent plastic instead.

The Mercedes star is covered in a qualitative chrome. From the lateral, the gaps appear to be minimal and they used the same matte plastic to replicate the signal light included into the mirrors body. The solution they’ve chose to model the wind screen area is strange. The pillars appear to be separate moulded pieces and the wind screen, surrounded by another frame was mounted between them. It results a gap between pieces and a visual discomfort. On the front lid and lateral fenders are replicated the fins, which are integrated into the air vents ensemble , but not like separate parts and are silver painted to look like the real aluminium. The grills here, were reproduced with black paint, not the best solution at all. Two metallic photo etched badges are lettering the car name and the final exhaust pipes were covered with a thin chrome frame.  On the rear side the taillights are looking good, the LEDs segment been more precise than CMC one, made on their model. The third stop lamp was only painted and the reflective segments are not looking properly, because they’ve used a clear translucent plastic, instead of a textured one. No real mesh here for the air vents as everywhere else. “SLR” initials and the three pointed Mercedes star are metallic photo etched pieces. The air splitter was moulded and well integrated in the model’s line. 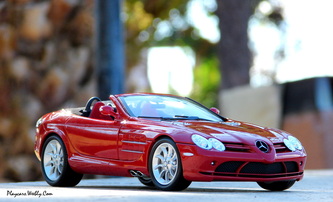 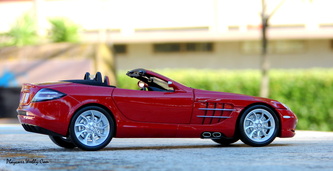 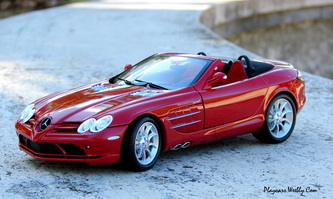 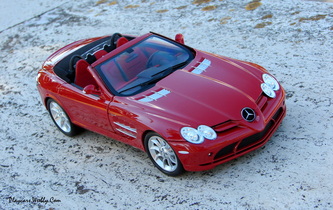 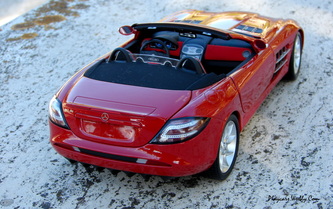 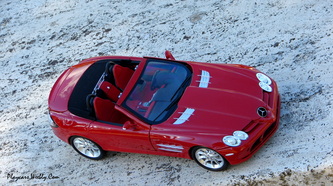 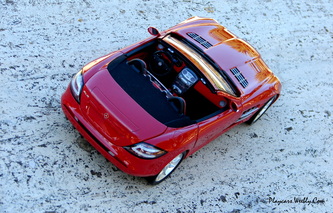 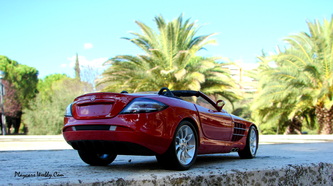 Having a turbine look, the rims are looking very good featuring accurate studs, the logo and car name applied on the lug nuts. If they had chosen to represent the valve steam, the result would be complete. For the brake system, I must say is better looking than the CMC one. Rotors are very good replicated and the brake disks behind are finished to look cross-drilled. Were kept silver, but on the real car are carbon made, so a dark grey tint would be the perfect solution. The calipers are simply made and aren’t branded. For the tires they’ve used a soft plastic, aren’t branded but, have the correct profile. 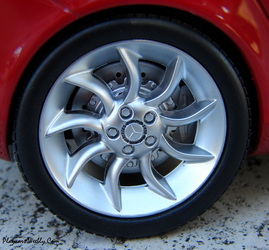 The doors are correctly opening, but the opening angle isn’t so wide as it should be. The interior is very simple made and not very carefully in matter of fit and detailing. Both seats, a part of dash, door panels and the roof cover are made of textured plastic. For the seat stands and central console they’ve tried to replicate the carbon pattern, but the color is too light comparative with the real carbon shade. Few commands and buttons were discretely moulded and marked on the central console, as long around the shift gear are only painted. The sticker used for the indicators is legible and looks quite nice, but the steering wheel doesn’t follow the real shape and the integrated commands are wrong sized. On the floor and trunk's surface was applied a carpet, having an improper texture, in my opinion. 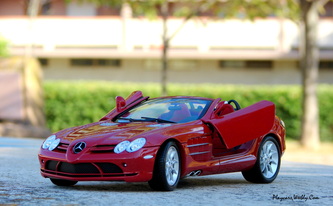 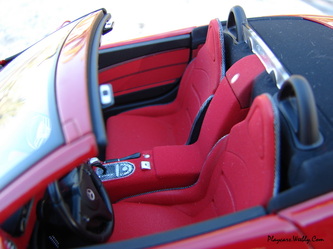 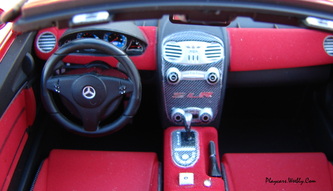 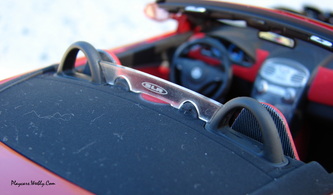 If you are expecting for a decent job in the engine bay, than you’ll be disappointed, because the engine profile was moulded on a plastic base. No individual parts, excepting 2 containers, no hoses or cables and even if correct painted is very poor detailed. 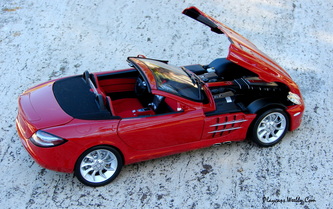 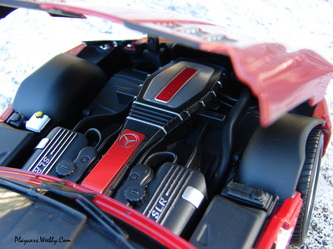 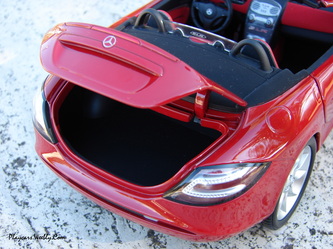 This model as I’ve been expected is good put together, but very poor detailed. They’ chose the cheapest solutions to craft a model dedicated to a superior level. Minichamps loses their ability in making models and this was confirmed by their newer releases. Isn’t a model to ignore, especially if you like the real car, but is an entry level one. If you have the chance to find one, under the suggested price, than could be a good deal.