Lamborghini Diablo 6.0 represents the last evolution of the original "Diablo" model and is one of the few models representing the AutoArt upgrade to the third generation of models. We will see during this review, which are the most important changes on this way. The model belongs to Millennium collection and with regret I must say is for the first time when a major part of the models from this category lost their styrofoam made box for a very fragile and no secure displaying box, specific until now to the Performance series. In fact the model is screwed on a plastic base and in a first phase the mobile parts are fixed with transparent stickers. A very wrong decision here, from them. But, let’s concentrate on the model now. It appears to has good proportions and stance, but quickly an error is visible when the model is watched from its side. The window's line isn’t uniform. The door's window frame is too high if we are to take in consideration the following little window. On the front, the lid seems to be wrong placed. Is crooked, it does not close properly and the shut lines are unequal. Another disappointing thing is that the manufacturer chose to made more plastic pieces instead of metallic ones. If until now, many Millennium models featured metallic bumpers and chassis, from now will be made of plastic. In fact the model is very light, fragile and noisy every time when you touch it.

For sure isn’t what the collectors have expected. The paint is well applied, not as glossy as it should and some differences between the painted plastic and metallic parts can be observed in the strong light. The lights are great done and the front air vents are covered with metallic mesh. The bumper lips and the lateral sills are covered with a thin decal carbon fiber look alike and isn’t bad at all. Looking on the lateral side the turn lights are still painted, but more precisely than before. The little air vents are covered with plastic meshes and a little marked decal was tampo applied in the front of the rear fender. The mirrors and sills are plastic made. On the rear side the taillights are beautiful, but the air vent between them is only a plastic textured base. Still no upgrade here from the previous Diablo versions. The final part of the exhaust system is chrome covered and looks good. No real license plates are available for this model, only marked plates with the type of the car. On the front hood the decal is a detailed sticker and on the rear, the name of the car is applied on the full grill and chromed. 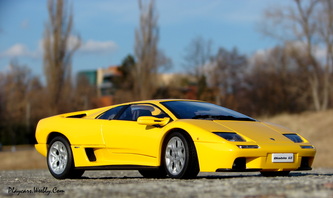 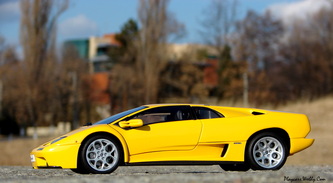 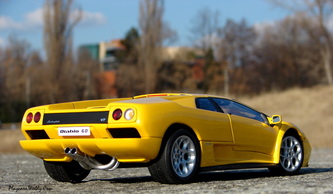 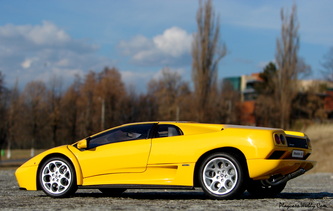 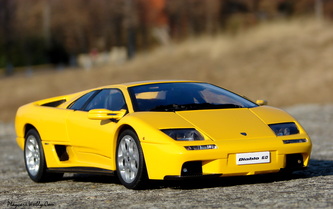 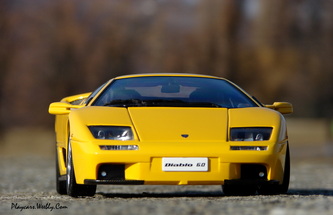 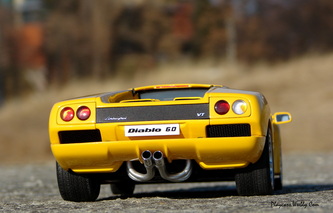 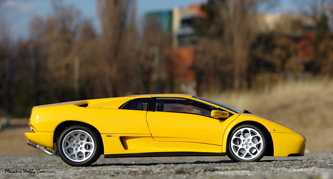 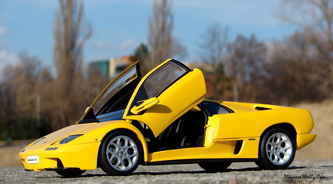 The doors are opening from a button near the door handle, but like usual aren’t staying open by itself. The cockpit is good looking, having carpet and carbon decals applied on the central console and on the dash board . Unfortunately on the central console, almost all buttons are only marked with paint, not moulded how they did it until now. They chose to do that because the fiber carbon decal was more easy to be applied after. I like very much how the radio zone looks . The interior is made carefully without disturbing visible gaps. The seat belts are textile made. What is wrong here, is the steering wheel base, too long replicated. 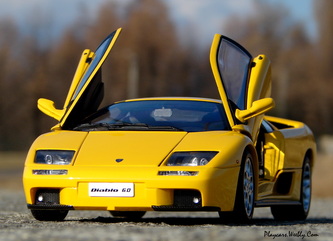 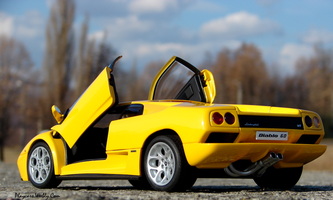 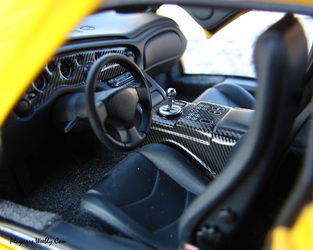 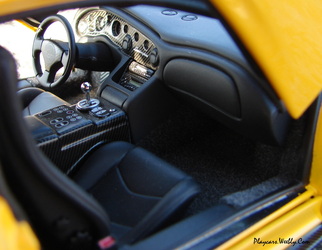 Wheels are correctly made and look realistic. Rims are nicely modeled having well replicated studs and the car's logo applied on the lug nut. Great attention and finish for the brake system, too with the brake disks covered with a metallic part to replicate the original steel and dimpled to fake crossed drilling. Dimples have the right dimensions for this scale and the calipers are black and "Brembo" marked. No other marks for the tires, which keep the generous dimensions and profile. 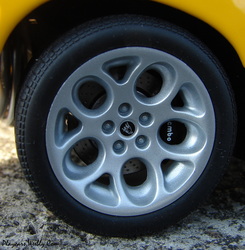 Both lids are functional. The rear one is opening on hidden hinges and a pair of struts is supposed to keep it open, but it doesn't. The engine is decent made, without many visible details, like the real one. Is correct modeled colored and marked with the car's logo and technical details. Few hoses and the exhaust system can be seen under its superior part. The front lid uses the same struts to keep it open, the system is functional this time and reveals a carpeted interior and a plastic panel from the ventilation system. 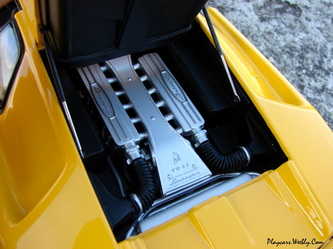 Being a good choice to be replicated in scale, the last version of the emblematic "Diablo" comes unfortunately with major problems of body crafting. Is a delicate issue, because more of that, all those fails are easy visible when you are looking to the model. Like I said in the beginning, I don't like at all the new package and the plastic made parts infusion. For sure AutoArt could done this better.

﻿
All Copyrights rest with the author. No reproduction without permission. Copyright © Play Cars- Auto models biography 2013﻿
Powered by