The most iconic car of the 80’s waited for a good replica in scale for some time. And the answer for this problem came from Kyosho. They've replicated first the street version and the Light weight some time after. More upgraded version and Le Mans versions arrived in the last decade. I added in my collection the Light weight version, just because the rims were more conformable to my taste. The model comes sealed in a second generation of boxes for Kyosho models, the polystyrene made ones covered with another cardboard printed with the model's images and marked. I was waiting for a while for this model, the real F40 being one of my favorite Ferrari cars. All the models before were cheap made, out of scale or having missing details. The model grabs all your attention for the first time. The stance is perfect, the panel gabs are very small and the scale is spot on. 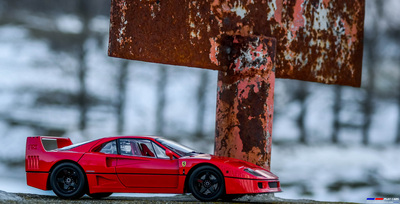 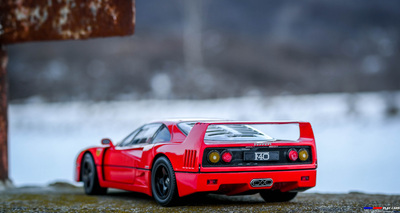 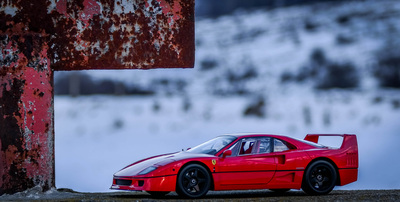 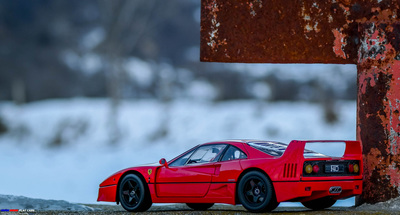 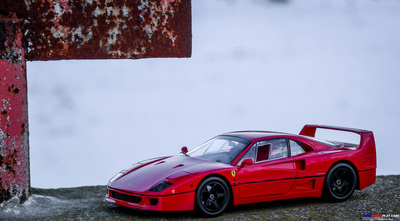 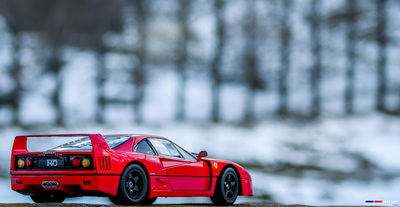 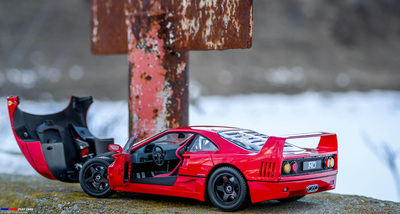 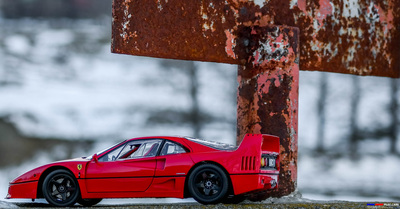 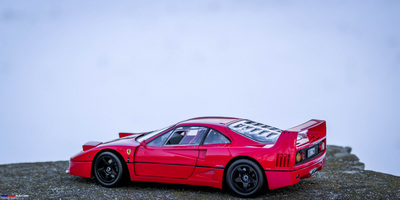 The red paint is amazing: perfectly applied, thin and uniform. Isn’t very  shinny, is just what you’re expecting from a manufacturer like Kyosho. The air vents everywhere are covered in real metallic mesh. The lights look beautiful, even the demister system was replicated on their covers. The pop-up lights are functional and can be operated pressing a button located underneath. The “Ferrari” logos are tampo decals. On the rear side the things are in the same way: beautiful perforated grill, taillights are separate pieces and the final exhaust is chromed. The “Ferrari” inscription under the huge spoiler is a metallic photo etched decal. The view is quite awesome, Kyosho did a great work with the exterior of this model. Even the “F40” mark was moulded on the spoiler side. The little lights from the bumper are attached using 2 stubs for each one, maybe not the best solution.
The rims replicate the original OZ racing and looks very nice. Are painted correct in black excepting the studs and the lug nut. Are marked with “OZ racing” The brakes are looking great having the disks covered in a metallic coat and the crossed drill effect applied. The calipers are marked. Tires are made by soft real rubber, but are not marked. 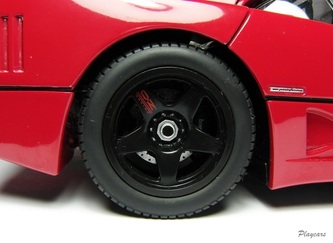 The cockpit is very simple, as in the real car, but carefully made. The entire dash board and seats are covered with real texture. The seat belts are made of textile material and carbon fiber is exemplary replicated on the back of the seats and chassis frame. One very cool yet subtle feature is the ability to move the seats. They are actually placed on runners and you can move them by pushing or pulling them at their bases. Very neat! The racing-like windows are replicated perfectly. 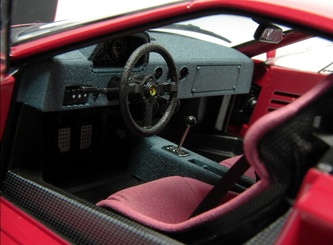 The front bonnet, in fact all the front part of the model can be opened on hidden hinges and reveals some of the finest craftsmanship of the model: big grills for the brakes to cool, air intakes or the cooling fans of the radiator. There’s even a small rubber pouch which would be a few basic tools and a flat tire help kit on the real car.
What’s even more impressive is the fully working and accurate suspension that manufacturer has used. The front wheels are turning, but the turning radius is very tiny and the tire actually catches on the wheel arch and lifts up the whole panel.
And now the best for last. The engine bay. Kyosho supply you with a metal rod that is used to prop up the enormous bonnet but you’ll have to find another place to keep it as there isn’t one on the F40 LW. The engine itself is a small masterpiece. Both, the real and the scaled one. If you look close enough you will see the cables for the spark plugs and other small, subtle and cool details. There are some labels that are printed on one side. The fully working rear suspension is also visible as are the gear box and the exhaust system. 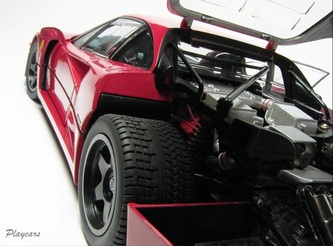 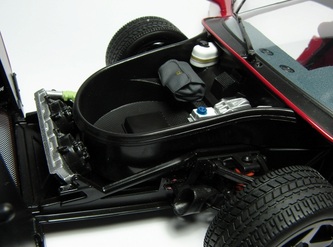 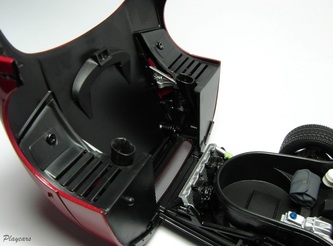 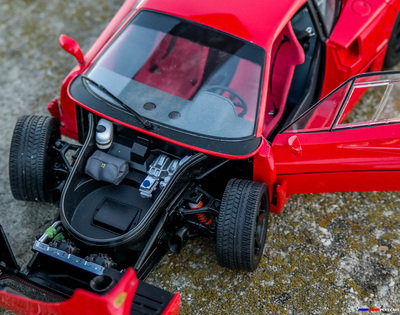 Overall the Kyosho Ferrari F40 LW is one very impressive model. Sure there are a couple of faults but they are something you can live with and won’t even care about, like the lack of details underneath for example. The last versions comes with better details but with a major difference of price, either. I must admit the Kevlar replica looks amazing and the leather straps used to fix the bonnets as well. But only that. And this isn’t an argument for the considerable price difference. I’m sure that even with the first edition of the F40, you’ll love it.