p       l        a        y        c        a        r        s
The consequences of a few hours spent through the auctions on a well known commercial site last week, have materialized today in a big parcel brought to me by the postman early this morning. If it was for the models that were already on my list from a while, that package would be left unopened until the evening when my daily routine was over. But, was something inside there, very tempting, highly desired from the moment when I saw the first sample being announced and always postponed because of its price, to be honest.
​
The hobby was missing a premium replica for one of the most iconic Porsche, the 911 Carrera (993), so when Autoart announced it, I was over enthusiast. I grew up with this model, it was everywhere:  in the magazines, movies, in every 90's TV car show and my old Bburago was ready for an upgrade for a long time.
In a time when resin made models or the composite material for Autoart are making the rules and the modern cars are taking all the scene, a metallic body classic car reproduction is a little wonder for every nostalgic in the hobby.

​From outside this model is a beauty and inspires quality everywhere, I can say is the best finished model from Autoart seen  in a while, well put together and heavy enough for my taste.
​And if we are arrived here,  I'll mention the visible lettering, included in the rear light bar, the same nice detail as on the real car and the reverse lights great replicated on the entire red texture. The traditional huge air vent fixed on the rear engine bonnet is well made and if is something missing from the exterior I'll consider the light washers, present in all the photos of the real car seen by me at this moment. 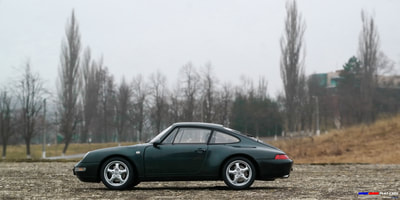 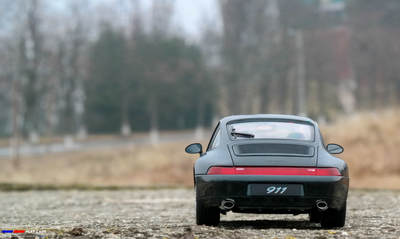 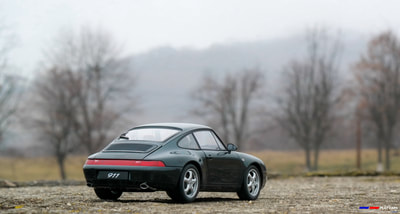 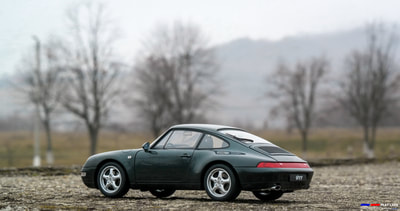 The interior is full carpeted and fabric made seat belts with metallic buckles are provided for all four seats. All the switches and buttons are in place, every single one wearing its own inscription and particular color for the warning button, indicators and seat belts release button. Is a high finish level here and the attention to details is proved by the two tone steering wheel, the textured plastic on the seats, trying to replicate the perforated lather and the pedals much better replicated than before. 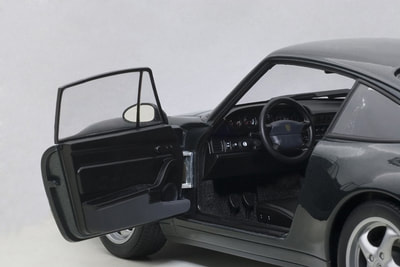 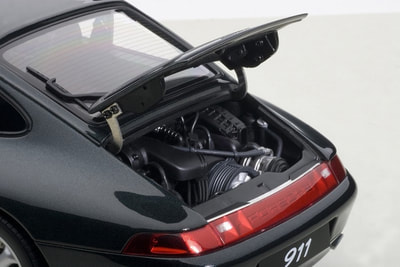 Both bonnets are opening on realistic hinges and if in the front side is only a carpeted compartment, the traditional Porsche rear engine appears to be better reproduced this time. For almost every Porsche model the engine replica is hard to be observed or not so good detailed because of the little space. Here,  the engine lid is opening wide enough and all the components are better designed, we have many separate pieces, flexible cables, some hoses, even an warning label. Some parts, together with the exhaust system are visible from underneath.
​Like I said the engine compartment offers a better experience this time.
​

In the end of this review,  I see once again a very good model, is still a new released one, it has few months now and I can't observe that the finish level overall is a lot better. I have here,  maybe one of the last metallic model from them and I see no reason to change it for something else. After a bad experience with a much expensive composite model, few days back, I can't be surprised: the old school made models still keep themselves fresh and better in any aspect. I can't find something wrong on it and this time Autoart gave us all the best they could with this model. And the legendary 993 deserves such a treatment.