Ferrari BB 512 represents the last metallic model made by BBR. And when it has finally arrived I felt once again the regret for their decision to abandon the metallic die cast models for resin ones. The package is the standard one and includes an opening manual, a rod, a tool for operating the functional parts and another for removing the wheels. The model is very well secured having foam parts attached between functional parts and the detachable front lid comes separately on its own plastic stand. It was planed in red on my wish list, but seeing the Le Mans version in real, I realized that I’ve made the perfect choice. The contrast between blue body color and the yellow livery looks wonderful. For the first time since I’ve open the box it was impossible to not observe the high level of details on this model. Is a fantastic piece of art and I’ll try to put in evidence every detail in my article.

We have here a perfect paint job, a metallic blue thin applied, smooth and glossy covers all the body. The livery and car’s badges are tampo applied. They’ve used metal for the entire structure, including the front bumper and  the chassis, as well. Result a heavy and very good put together model. Even if, features a lot of clamps and safety pins which appears to be fragile on a first inspection, in fact are very strong and you’ll be able to manipulate your model without injuries. Is remarkable the attention for details, every single piece being replicated everywhere. And just look the headlights were the real rivets which attach the cover are replicated with minuscule metallic parts on our model. Inside, the lens are perfectly shaped and chromed and even the light bulb is in its own place. The grills are covered with real plastic meshes everywhere. The front bumper includes a tow ring, replicated by a fine metallic photo etched part. For the headlight covers the plastic was textured and the final result is looking very realistic.

Turn signals were made of translucent orange plastic and attached without visible stubs. Made from a metallic photo-etched part, the screen wiper results very thin and has the washer's hose attached. Like I said, they've considered all the minor details, for example the metallic pieces used to attach the wind screen are replicated on the model, too. Moving on the lateral side is easy to observe the aerodynamic profile of the real car perfectly brought in scale by the manufacturer. Everywhere the gaps are minimal. Some safety switches are placed next to the door, having their own labels and very nice detailed. What is fantastic looking is the fuel lid, metallic and modeled as a raised part. They’ve practically shaped a piece of metal to look like a fuel lid and kept its natural texture and color. It wasn’t enough and the rivet heads and the smooth interior were replicated as well. Is looking like a real counterpart and once again BBR proved their craftsmanship skills. The spoiler is metallic and on its base has the rivet heads replicated. Great job on taillights as well, are made of translucent plastic and have the correct colors. What is more amazing is that each is made from a single piece. 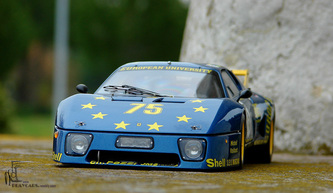 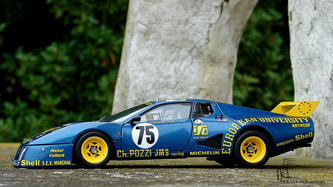 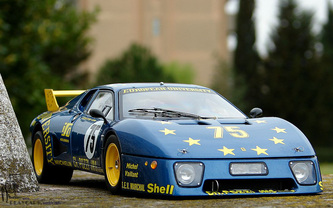 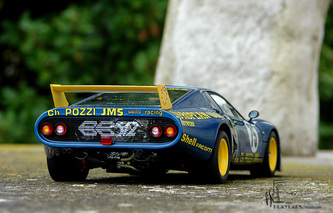 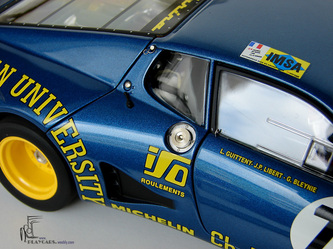 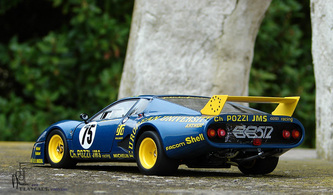 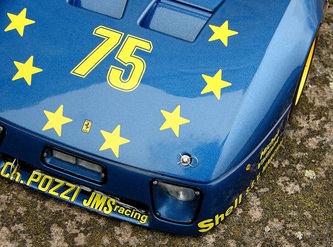 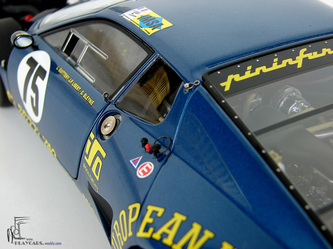 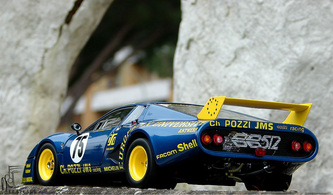 The rims are correctly made featuring a perfect paint job and the air valve and lug nut as an individual metallic pieces. Using the included tool , the wheels can be removed. Tires are feeling rubbery and have a slick profile. Using the tool included in the package, the lug nut can be removed, for a better observation of the brake system. The suspension is revealed, also. For the brake system, the calipers look simple, but the disks and rotors are great crafted-metallic look alike. 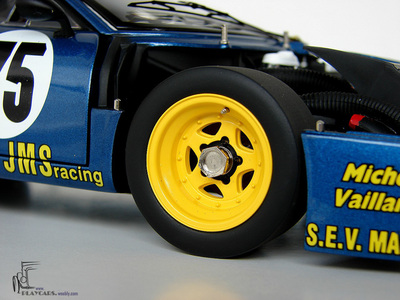 Opening the doors was never so good. A fine metallic photo etched part represents the door handle and the door's bold is metallic and functional being activated by a spring. In fact when you are closing the door the sound is the same as on your real car. I don’t know how many times you’ve read “fantastic” until now, but this is fantastic! The doors featuring race functional windows. On the interior everything is very well detailed and finished. Steering wheel is good moulded and have the Cavallino rampante’s logo in the middle. All indicators were detailed like individual parts and are legible. The central console, if we can call it so, in fact a panel including all the buttons and switches was placed near the driver sit and great detailed with  different colored wires. A fire extinguisher was placed in the cockpit, too, including the hose and switch. Seat belts and the head protection for the pilot are beautiful detailed and textile made. The shift gear was realized from metallic photo etched parts and give a great realistic note. 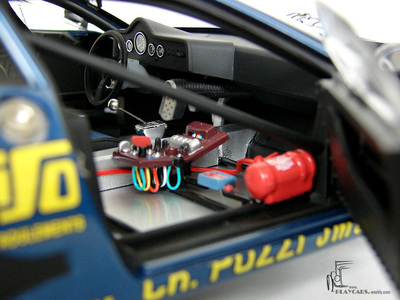 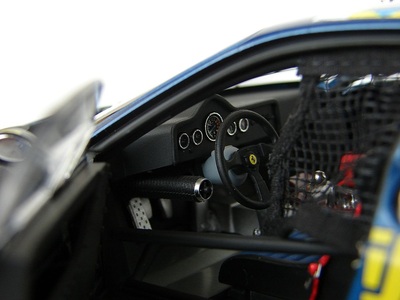 The front lid is attached to the body using functional pins, which are metallic and very delicate. When is removed it reveals separate containers having metallic lids, front brakes and cockpit’s cooling pipes and the huge superior air intakes. The plastic they've used is qualitative and have moulded in, the rivet heads. But what is a really an avalanche of details is the engine. Can be seen from the transparent window, first and already you can have an idea about what you’ll find there. The massive and heavy bonnet can be fixed using the provided rod. And just take a look here: high class detailing and materials everything materialized with a lot of precision, work and passion. First time I’ve thought that the engine is metallic. But no, is just a qualitative plastic, very nice textured and painted to give the metal look impression. We have a lot of containers, of course made as individual pieces, having labels and wired. Are present 2 types of hoses: thin and transparent and bigger, made of rubber ones. On the containers, the welding line is replicated and are finished to look like the aluminium real counterparts or chromed. The dumpers are a really eye catcher, being made from 2 parts, a chromed and a paint one, featuring real metallic springs and a label for specifications. Great detailing for the exhaust pipes as well, their final part was finished to look like burned metal and are attached with 2 metallic clamps including a real spring. Everything here will make you to search for the keys in order to start this engine. Is so great and realistic done. Underneath, are visible the exhaust system, engine and few hoses and the suspension. 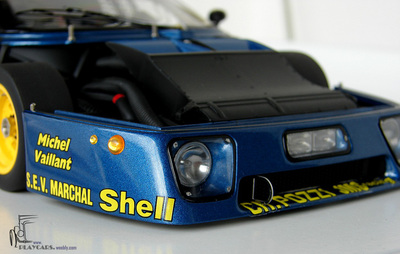 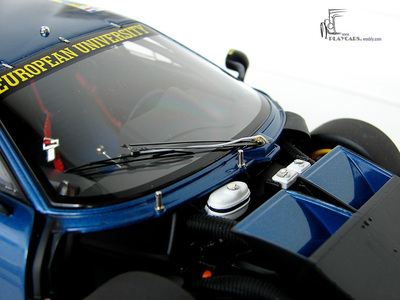 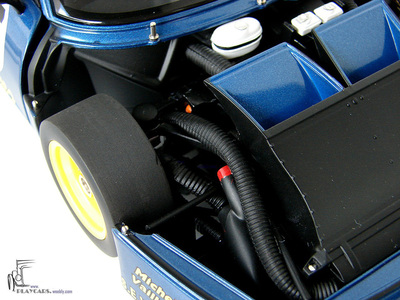 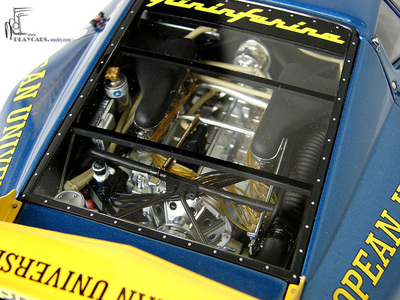 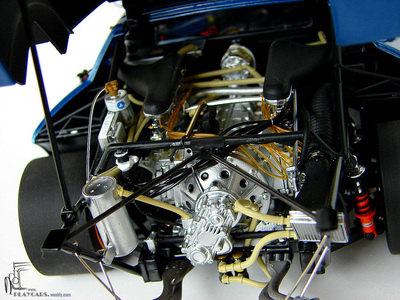 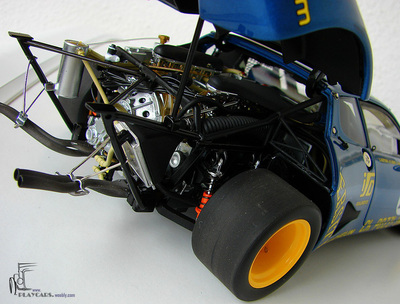 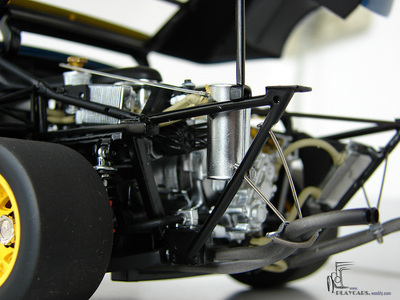 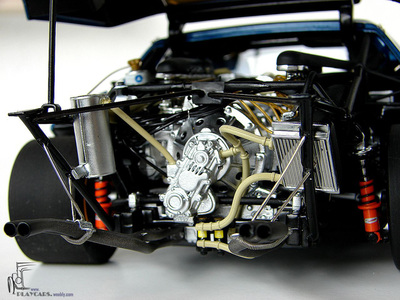 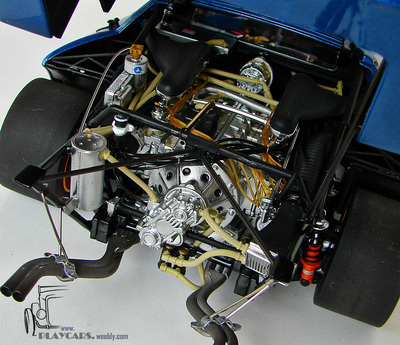 This model is a performance in hobby, featuring a lot of great functional details, good materials, precision and passion. BBR brought their craftsmanship on the level of art. Is such a pity, they’ve discontinued the metallic die-cast models. This model deserves to be add in every collection and for sure you’ll enjoy every moment looking at what it’s offering.


All Copyrights rest with the author. No reproduction without permission. Copyright © Play Cars- Auto models biography 2013.
Powered by