If you are looking for a beautiful shaped sport european coupe from the 70's, will be hard to not mention something about the BMW models. With a impressive Karmann design and a fabulous engineering, these models were imposed on the street and on the track, also. And if for a petrolhead or a BMW brand connoisseur, the CSL badge comes around with the model's indicative than, their adrenaline level will increase significantly.
For me was the same best feeling, as a collector when, few years ago, while still getting used to the premium models, found some photos of the beautiful BMW 3.0 CSL (E9) by Minichamps. I don't know exactly what drew more, the model itself or the color- a mixture of light yellow shade having a discreet green tint. The model was very rare, being released from a long period and I was able to be its happy owner only three years ago.

The model comes in a styrofoam box, protected by an additional card one, covered by photos of the real and scaled model, too, together with a short history. For its age, the model is an impressive presence. It was released in two colors: silver and yellow. Is easy now to guess what color I chose for mine. Is perfectly painted, having the specific lateral stripes done precisely. The paint job is very actual, in fact. The exterior ornaments miss the chrome, if we are to compare with the real car. Only few were chromed: on the front grill, taillights frame, on the license plates or wipers. To replace it, the manufacturer used silver paint, more visible at the fenders level. The lights and turn signals are made well with a plus for taillights, but are fixed with visible rivets. Isn't a curious fact for the time when this model was released. It doesn't feature perforated grill, neither, excepting the air vents located on the engine lid. All the badges were modeled on the body, trying to be highlighted like single parts. I like the real license plates, very accurate and the hood pins made by thin metallic photo-etched parts. Looking at some photos with the real model, the fuel lid, appears to be positioned too much to the back. 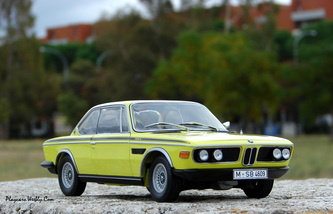 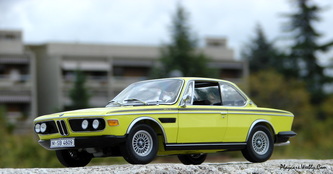 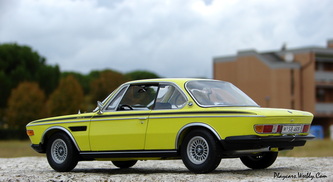 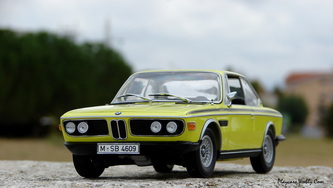 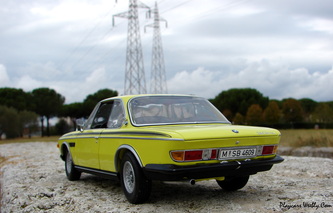 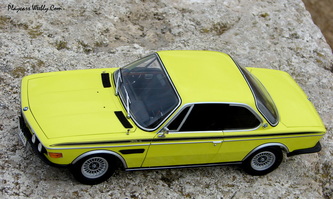 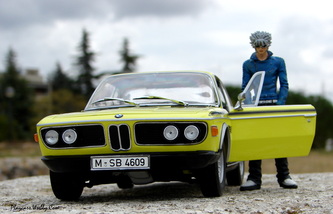 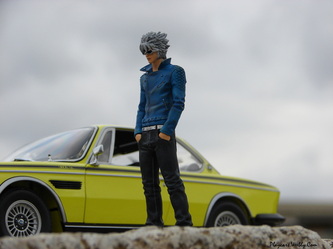 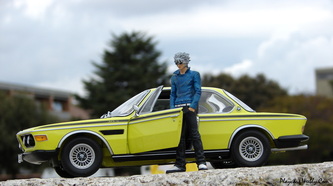 The rims are accurate, keeping modeled the rivet heads and the BMW logo in the middle. This time the BMW's logo was beautiful crafted, having its frame chromed.
Tires are made of a soft rubber, but no additional marks can be found on their lateral walls. The brake system isn't visible from the exterior, but is present and visible underneath.

I was surprised to see that, they used hidden hinges on this model. Taking in consideration its age, this is a great improvement. The driver's door has no window, except the single, little one. On the interior, everything seems to be made carefully and properly finished. I like the wood ornaments fixed on the dash and door panels, even on the central console and the racing „shell” seats, perfectly modeled. The indicators are nicely made, legible and providing beautiful chromed rings. Unfortunately for the steering wheel's spokes and few other ornaments the silver paint, replaced the chrome. The interior was carpeted and a plus comes here for the delicate pedals. The interior misses the safety belts, but is still a great crafted one.
The front lid opens on hidden hinges, too and reveals a very beautiful view. The engine was replicated using many single and custom made parts. It was wired and marked with many warning labels, almost legible. The engine bay is great detailed and represents the strong part of the model.
Backside, the trunk lid must be opened using a tool, because the gap is minimal, in fact all over the model are the same. Inside, a carpet was added along with a storing compartment.
Underneath, the model was detailed nicely: the engine, gear box, transmission and suspension, and many other parts were individualized and visible. 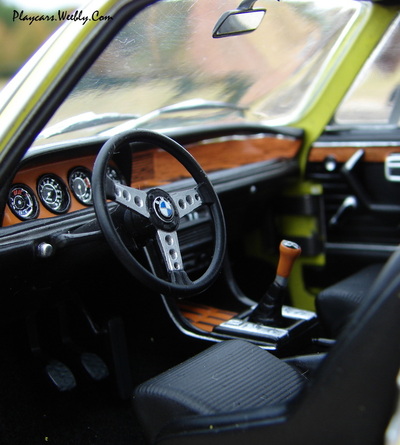 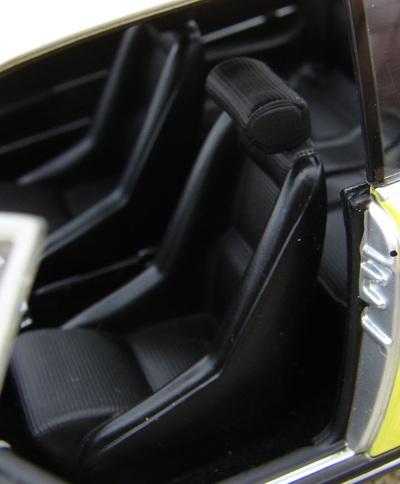 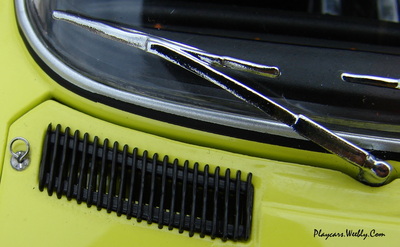 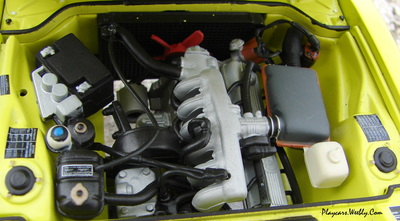 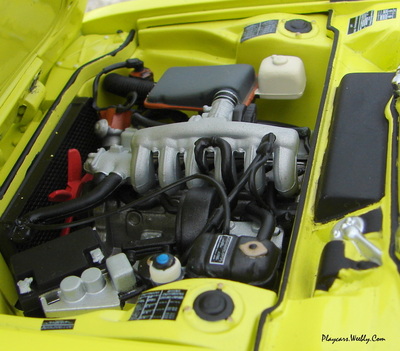 This model belongs to the „golden era” of PMA's collection. After many years from its release, still continues to surprise. Even if we are to compare it with more actual models, is very well painted and detailed. The crafting is better than other models recently launched by PMA. For me represents one of my favorite classic model from my collection, but in the real car's world, too.